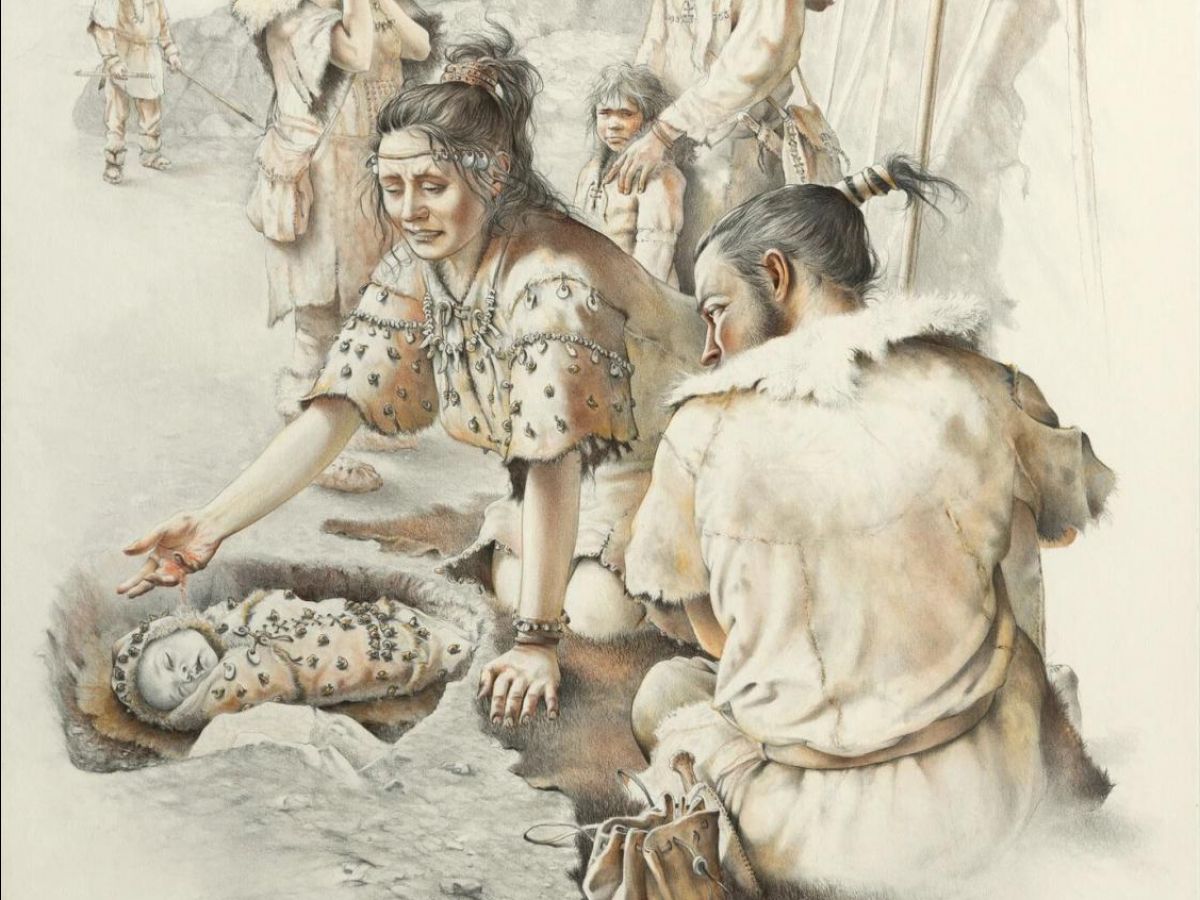 The burial is moving, both for its rarity and for what it tells us about the men and women who populated this region of Europe around 10,000 years ago. Discovered in 2017 in a cave in Arma Veirana, in Liguria (Italy), it contained the remains of an infant, a little girl, aged around a month and a half and nicknamed Neve by the researchers. Finely analyzed by a team of archaeologists and anthropologists from the University of Montreal, the tiny bones, like the perforated shells that accompanied them, were able to deliver, five years after being unearthed, unprecedented information on the care given to the burial of babies at the end of the Mesolithic, and on the symbolism of the ornaments intended to accompany them in the afterlife. This work has been published in the Journal of Archaeological Method and TheoryAugust 30, 2022.

Seashells sewn onto a sling

If the tombs of children in the Mesolithic are relatively exceptional, those of infants can be counted on the fingers of one hand. Also the way in which the youngest were adorned and buried by their elders, revealing the place granted to them in these prehistoric societies during their lifetime, remains shrouded in gray areas. In recent years, however, the development of new technologies has shed new light on ornamented burials already identified and studied by archaeologists, such as that of Neve. “Thanks to photogrammetry, we were able to create a 3D model of the tiny skeleton – as fragile as butter – and learn more about him”explains to Science and Future Claudine Gravel-Miguel, archaeologist affiliated with the University of Arizona and guest researcher in the anthropology laboratory of the University of Montreal. “In particular, we were able to determine the position of the beads made of Columbella rustica shells – preferred in the Mesolithic – and put forward our hypothesis on the way they were arranged on the infant.”

Small shells listed according to their location on the skeleton. Credits: C. Gravel-Miguel/ University of Montreal

It turned out that the shells were to be sewn onto a sling, probably made of leather, which wrapped around the baby’s body like a swaddling blanket. “In archaeothanatology, the position of certain bony connections can be used to assess whether a body has been wrapped, and that is the case here”, assures the researcher. Claudine Gravel-Miguel and her team push the hypothesis a little further: during the child’s lifetime, this same swaddle could have been used as a sling, or “baby carrier”. Indeed, recent research suggests that the need to carry infants could have appeared as soon as hominins became bipedal (residues of skin and tissue interpreted in this sense, cave paintings depicting scenes of carrying, etc.). “It was about the parents keeping their child close to them while allowing their mobility, as seen in some modern forage groups”says Claudine Gravel-Miguel. “It would not be inconsistent to trace this practice even further back in time, although we cannot go beyond speculation as to how the sling enveloping the newborn here was used.”

The scarf featured over 70 small Columbella rustica and four large perforated bivalve pendants, about four centimeters in length, never seen before at other prehistoric sites. For the researchers, this imposing size considerably reinforces the hypothesis of an ornate scarf, since the shells cannot be used as jewelry on such a small child. Attached to the scarf, they would instead have created a noise – a soft clicking sound – which may have had a particular function. From there to speak of noise intended for the awakening of the baby? “It’s not excluded”replies Claudine Gravel-Miguel, “but again impossible to say”.

A reconstruction of the burial. Credits: C. Gravel-Miguel/University of Montreal

In addition, most of the beads showed signs of wear resulting from use. “over a considerable period”equivalent to several generations. “Given the effort it took to create and preserve these pearls over time, it is interesting that the community decided to part with them when burying such a young individual”, points out the expert, who offers two possible explanations: the ornaments could constitute the heritage of the little being who left early, thus marking his value in the eyes of the community, or embodying a form of protection against negative forces. Having failed in their function, they would thus have been buried with the body rather than reused. “In any case, we have observed within populations of modern hunter-gatherers this role of ‘repelling negative forces’ attributed to certain ornaments.”

Precious clues about the place of girls

In any case, the little tomb says a lot about the place given to newborns, the most fragile members of the population in times when medical care was almost non-existent and the dangers of nomadic life constant. “Neve’s tomb is the first to feature so many ornaments. It clearly demonstrates that women – and especially little girls – were important within Mesolithic communities.” We could indeed still doubt it: the oldest recorded baby graves (and allowing the sex of the deceased to be determined) had so far all been attributed to male individuals. That of Neve finally came to be an exception, proving that little girls were buried with the same respect as little boys.