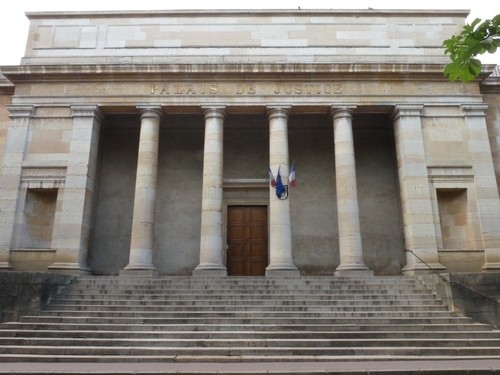 Fragile. Both. For different reasons, however. They got married, had a baby, a little girl with a sweet name. These parents dreamed it up, they love it, but here it is.

This Monday, December 5 at the hearing of the immediate appearances the young father (he is 30 years old) is tried for violence on his wife. He defends himself by invoking his own violence.
It was the night of August 3, in Saint-Rémy. The baby was then only two months old and he was crying, “he had colic” said his mother who had prepared a bottle that the child did not take. In desperation she will wake up the father. “By shaking it,” she said. “By hitting me,” he said. She had put the baby in his arms, he puts him back in his cradle, knocks the young woman over on the bed, blocks her with one knee resting on her chest, kicks her, slaps her. She manages to lock him in the bedroom, calls the police who discovers her carrying the baby and traces of blows, and the gentleman back to sleep in the marital bed. These young parents are so unhappy that they have not stopped blaming each other.

Alexandre Marey, deputy prosecutor, supports the defendant’s guilt with the following elements: the medical certificate which shows traces and pain, the 5-day ITT, the photos of the traces of beatings, and the testimony of the victim’s brother who, awakened by the cries, “saw Madame leave the room, in a state of shock and with these same traces”. He requires the sentence of 10 months in prison fully accompanied by a probationary suspension for 2 years.

The lawyers do not go hand in hand

The lawyers, both for the victim (Maître Bernard), and the defendant (Maître Grenier-Guignard), do not go out of their way to support their respective clients. On the victim side, we assert that “Mr. is a recognized schizophrenic who does not take his treatment, and that is scary”. On the defense side, we bring out files on Madame, in particular a consumption of “joints”, already old and still relevant, which could shed light on “his memory problems” and his distress that night (“he takes care of the baby during the day, Madame does a lot of sofa”), it being understood that the stroke which struck the defendant last spring left its mark, and no doubt a lasting fatigue (which can shed light on a reaction at the end of its tether – without the ‘excuse). Asthenia aggravated by a depressive state, which in a severe form in 2018, led the defendant to receive a disability pension. Fragile, we tell you.

Maître Bernard reassures the court: mother and child were welcomed by a dedicated structure, with educators on site to help and support mothers who need it. Maître Grenier tempers the quasi-accusation of “schizophrenia”: “I see nothing in the file that goes in this direction. The psychiatric expert spoke of “psychotic personality without an acute psychotic episode”, “no dangerousness”*, “impaired discernment at the time of the events”. (The representations we have of what is called psychosis are quite terrible and above all, false*, it is worth researching a little, ndla)

“You’re breaking the frame and you’re blackmailing him into suicide. – Yes. »

President Madignier evokes an incidental procedure, “for which there are no prosecutions”: the two violated the ban on contact (which strictly speaking was only binding on the gentleman, but logically concerns both) . “Sweetheart, answer me, I can’t live without you. I would rather die of it. I regret too much what happened. You’ll be better off without me. Goodbye. The President: “You are breaking the framework and blackmailing him into suicide. – Yes. ” Good.

“Despite your explanations, the court found that you were not in a state of self-defence”

The court decides, since this is what is asked of it, declaring this defendant (with a clean record for another two seconds) who stands upright in a light black suit, guilty, condemning him to 6 months in prison accompanied by a probationary sentence for 2 years, with the obligations to work, to follow care, to compensate the victim, and the prohibition of any contact with her as well as to appear at her home (these measures are effective immediately). “Despite your explanations, the court found that you were not in a state of self-defence. »

We have a thought for this baby with a sweet name who will go from his mum to his dad (then from his dad to his mum) carried by arms that we hope are sufficiently loving or at least neutral and reassuring, not to add a ladle misfortune to an already… fragile situation.

* https://www.cairn.info/revue-l-information-psychiatrique-2006-8-page-645.htm
“The problem of the violence of the mentally ill has always oscillated between an unqualified stigmatization and an affirmation no less militant of the absence of dangerousness of the mentally ill. For a long time, violence and mental illness were associated before international studies disseminated by scientific societies proposed an opposite position from the 1980s. In 1987, for example, the National Mental Health Association recalled that “people with mental illness are no more at risk of committing a crime than other members of the general population” as long as problems of alcohol and drug use are excluded. Régis Cousin formulated it clearly in our country in the following way: “the majority of crimes are committed by delinquents who do not present any mental pathology, few criminals present disorders”. However, public opinion, across the Atlantic as in Europe, has a very stigmatizing view of mental illness as a leading factor in crime. »