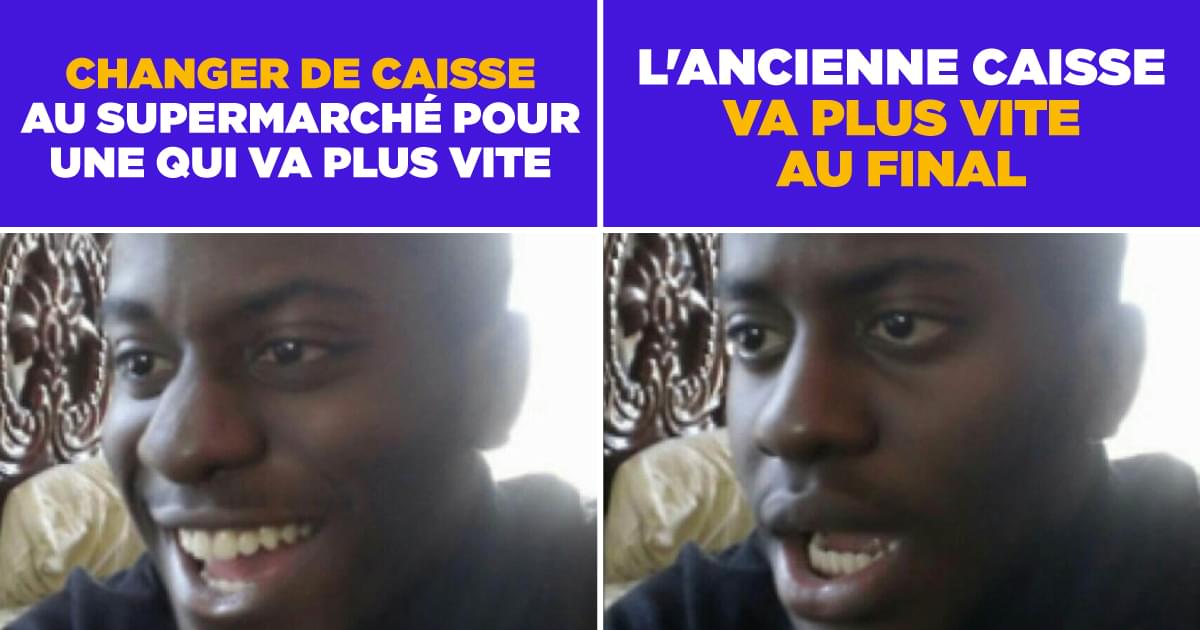 Life has funny ways of reminding us that we are nothing, that we don’t matter and that if we died right now, it wouldn’t change anything in the world overall. Yeah sorry, that’s hard to hear, but at the same time, it’s true. Anyway, sometimes life sends us passive-aggressive signals that aren’t bad enough to fuck up a whole day, but enough to get through a bad time, the little defeats of the life that we offer you to see here.

1. When we let a car pass out of courtesy and it steals a parking spot on the next street

It happens that at the intersection of a street you let another car pass, saying to yourself “anyway I’m driving at two an hour since I’m looking for a place, as much as it passes in front”, except that this car also tries to park and ends up stealing the first available space she finds. What make you want to puncture your tires.

2. When you order food out of laziness to move and part of the dishes are missing

Had to move your ass, you’re never better served than by yourself and you can even suspect the restaurants of doing it on purpose to take revenge on the pissed off customers they can’t piss off when they’re in the establishment. That’s the only explanation I see.

3. When you meet someone who is going to go to the bathroom when you come out and it stinks because of someone who came before you

It must have happened to you before: you enter a toilet where it smells really horribly bad, you do your little errand and on your way out you meet the next occupant whose face you already see decomposing because of the smell and you try to say “no, but it already smelled when I arrived”. This person judges you strongly.

4. When we crack games and applications so as not to pay and in the end we end up with a virus that harms our computer

Had to pay, if people take time to produce a work, the least you can do is not steal it. Another great proof that karma exists and that you shouldn’t do too much shit.

5. When you buy a GPS on Amazon to find your way around better, but in the end the package is lost

Ok it’s rare but it’s already happened to a friend whom I’ve never seen since he got lost during his holidays in the Larzac since he had obviously never received his precious GPS. Thierry, wherever you are, I’m thinking of you.

6. When we only ask for sweet sauces and only get salty sauces

Or the opposite, the idea being to end up with the exact opposite of what we had ordered and that it totally ruins our dish since we have nothing to accompany our dish or our sushi apart from an old oil zesty pizza that’s over six years old.

7. When we host a friend to sleep over for a few days and in reality he’s a real asshole

We discover that this friend that we like and that we help out is a big disgust, does not respect anything, does not participate in the races and eats everything that lies around, smokes in our living room when we are not smokers and maybe he even pooped in the cat litter box. Really uncool.

8. When we buy weed and we get herbs from Provence

Anyway you don’t have to go buy illegal products so you can only blame yourself. But having a carrot is never nice.

9. When you meet a loved one’s baby for the first time and you can’t hide your reaction to his unattractive physique

You are going to visit this couple of friends who have just had a child and they introduce him to you by saying “did you see what a beautiful baby he is? and you can’t hide your disgust at that red, wrinkled little digestive tract… I know how you feel.

10. When your neighbor chooses your telework day to test his new drill

We tell ourselves that we will be able to sleep a little more and enjoy a quiet day away from the office and no, this bastard neighbor has also decided to be at home, but to do some work from 7 a.m., because that he clearly has no respect.

11. When you buy fruit but only the top of the tray is not moldy

When you finally decide to take your food back into your own hands and you’re going to spend a lot of money to buy fruit, what a disappointment to realize that they’re actually all moldy and that apart from a jam, you can’t not make a big deal out of it, as if life itself didn’t care about us.

12. When her line at the checkout isn’t moving, then we change lines and now she’s the one who isn’t moving…

… so we change stores but the other store is closed so we go home without shopping and our wife leaves us because we haven’t brought the bread to make the croque-monsieur and she is also cheating on us. Without protection.