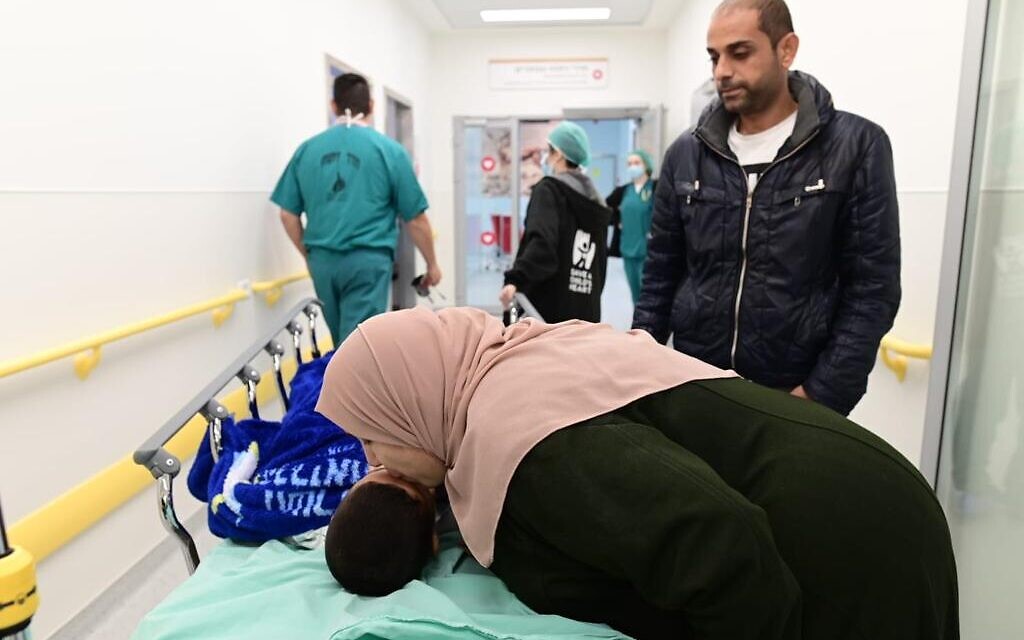 A baby boy from Gaza was brought to Wolfson Hospital in Holon on Sunday, where Israeli surgeons performed open-heart surgery to save his life. He was the 3,000th child from the Palestinian territories to undergo such an operation under the program set up by an Israeli NGO.

Amir Yichya Mabchuch, originally from Jabaliya, a town north of Gaza City, made the trip to Israel thanks to the Israeli non-profit organization Save a Child’s Heart which, since its founding in 1995, has helped more than 6,000 children coming from abroad with their families for life-saving surgeries.

These children came from more than 65 countries – mostly developing countries – many of which have no diplomatic ties with Jerusalem.

Receive our free daily edition by email so you don’t miss any of the best news Free registration!

When he was only two months old, a doctor told Mabchuch’s parents that their newborn had a heart failure. His mother, Maha, had brought him to the doctor’s office for a viral infection and the family doctor had noticed that one of the baby’s coronary arteries was blocked.

“We understood from the start that Amir would need surgery to cure this heart failure,” explains his mother.

The little boy was deprived of a normal, carefree childhood. He is not able to carry out simple tasks and is forbidden to run like other children of his age, or even to walk for a long time, the exercise of which could prove fatal for his fragile heart. He was placed under medical supervision throughout his life.

When Amir’s family found out about the opportunity for heart surgery in Israel during a visit to a doctor in Gaza, they didn’t hesitate.

“When the doctors told us that there was a possibility that Israeli doctors would perform the complicated surgery that Amir needed, we felt so happy! Everyone in Gaza talks about the quality of the Israeli doctors who are considered here as the most professional in the world, as doctors who can be completely trusted,” she adds.

To bring Amir to Israel, Save a Child’s Heart submitted an application on his behalf and on behalf of the little boy’s family, claiming the right to enter Israel. The family, for its part, submitted a separate request to leave the territory to the Hamas terrorist group, which heads the enclave.

Life-saving surgeries carried out by the organization would not have stopped during the coronavirus pandemic, even though the number of Gazans allowed to enter the Jewish state for medical treatment had been drastically reduced at that time. to, it seems, prevent the spread of COVID-19.

Even before the pandemic, a significant number of requests to leave the territory of Gaza for medical treatment were explicitly rejected or not answered, implying that the persons concerned were unable to travel to possible medical appointments within the Jewish state.

According to the UN’s World Health Organization, about a third of the approximately 24,000 Gazans who had requested permission to leave Gaza in the year before the pandemic – including hundreds of people suffering from heart disease – didn’t get it.

Critics blame the poor medical care provided in the coastal enclave on the twin blockades imposed by Israel and Egypt in the aftermath of Hamas’ takeover of the strip in 2007.

Israel, for its part, claims that the restrictions put in place are aimed at preventing Hamas from bringing in weapons and materials needed to build fortifications, and that the blockade allows the import of medicines and other medical and humanitarian equipment. Critics blame the delivery verification processes, at the entrance to the enclave, of slowing down the supply chain, leading to shortages.

Little Amir’s operation was complicated and required the use of advanced technology not available in Gaza – but it went smoothly, says surgeon Hagi Dekel.

“The intervention aimed to remove an obstruction in the left ventricle. An obstruction of this type, if left untreated, can damage the valve and in the worst case it can lead to sudden death… The aortic valve has been opened and the thick tissue that obstructed the valve has been removed. successfully removed,” he says.

The deputy director of Save a Child’s Heart, Tamar Shapira, said the organization not only saves lives but also helps build bridges between Israelis and Palestinians.

“We have been saving the lives of Palestinian children for more than twenty years and I always say that in addition to saving lives, bringing hope to families, we also manage to build bridges between different peoples exclaims Shapira.

Amir’s family say they will return to Gaza feeling deep appreciation for the Israelis who stepped in to help Amir.

“I know there are still tensions between Gaza and Israel, but that doesn’t change my son’s story. I completely trust the Israeli doctors and I am convinced that they will save the life of my little boy,” Amir’s mother said just before the operation.

You are one of our loyal readers!


We are glad you read X items from Times of Israel last month.

That’s what we work for every day: to provide discerning readers like you with relevant media coverage of Israel, the Middle East and the Jewish World. Unlike many other outlets, our content is accessible for free – with no paywall popping up from the first paragraph. But our work is proving increasingly costly. This is why we invite readers, who can and for whom Times of Israel in French has become important, to support us by joining the Community of Times of Israel in French. For the amount of your choice, once a month or once a year, you too can contribute to this quality independent journalism and enjoy ad-free reading.