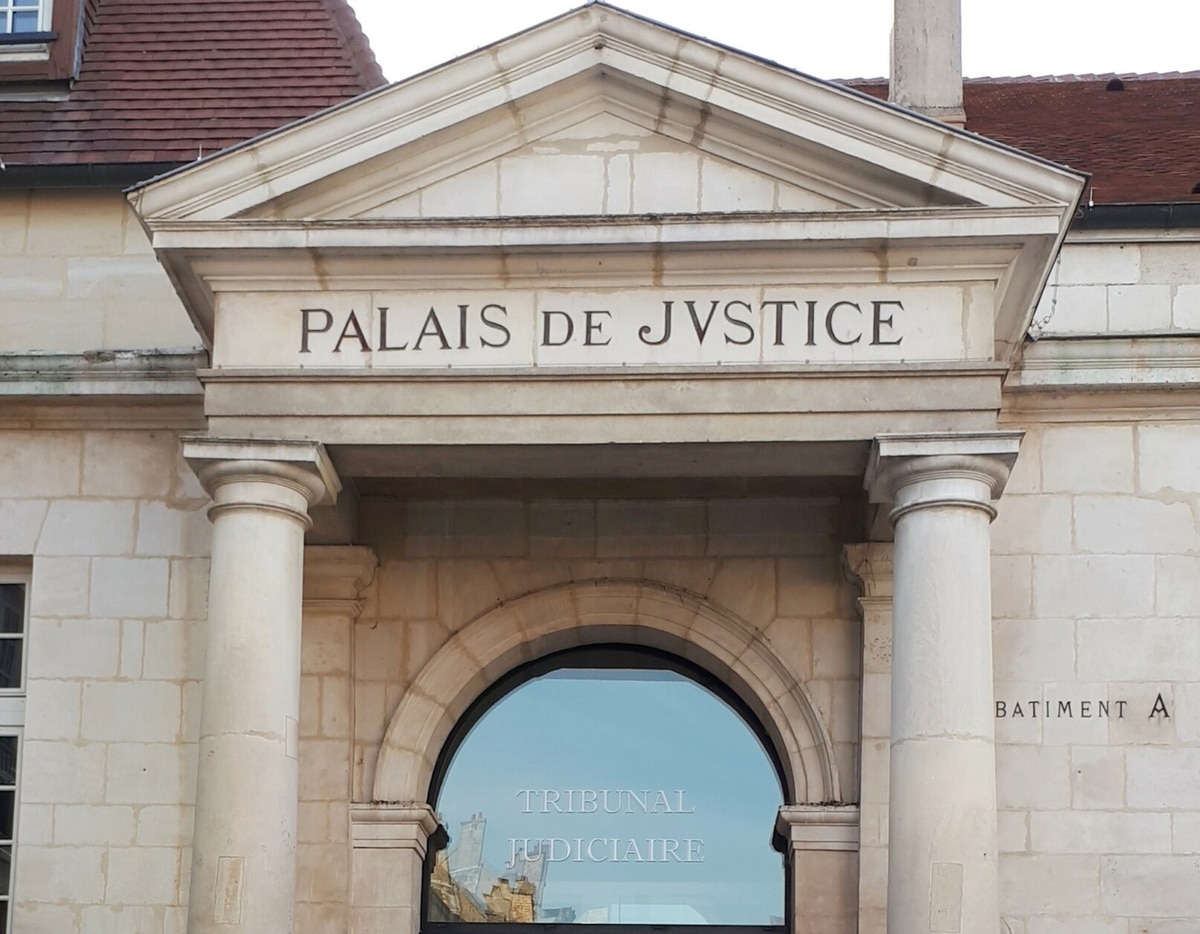 A 4-month-old child shaken and thrown against a hard plan, a father denying any involvement, five days of trial and a verdict. Jimmy K. was sentenced to 25 years in prison.

Despite various overwhelming elements, Jimmy K. will not have budged. ” It is not me “. Advocate General Cecoltan has a completely different opinion on the matter. As a reminder, the father of the family was accused of having committed, on April 3, 2020, violence which led to the death of his son, a 4-month-old infant (our editions of November 22, 23, 24 and 25).

“Elodie had to go to the Red Cross to pick up a package containing, in particular, infant milk that the baby was sorely lacking. Everything had been planned since the day before, this trip was planned and essential. (…) The sequence is indisputable, the child was fed and put to bed in the parental room, Jimmy K. was in this room, the child was fine. Jimmy K. stayed in this room, he joined Elodie who then left, Jimmy K. was therefore alone with the child until 3:42 p.m., when he called the emergency services”.

A pediatrician and three forensic doctors reported violence of different kinds (our edition of November 24). “Indisputable medical elements make it possible to identify the culprit! The forensic doctors, three in number in this file, explained unequivocally, in view of the seriousness of the lesions, that the baby had immediately fallen into a coma, that the baby had immediately lost consciousness, which makes it possible to exclude that Elodie may be at the origin of this violence, the shaking must have taken place after her departure. (…) As far as violence is concerned, it is not a single act but acts that last, we shake the child, we squeeze his throat, we put a hand on his mouth and we throws him against a hard surface”.

Jimmy K. said so on the first day of the hearing. “Maybe it’s the mother.” A hypothesis evacuated by the prosecution. “Elodie’s phone went off one last time on one of the Rimaucourt relay antennas at 2:31 p.m., the child was found by Jimmy Koch more than 3 p.m., the call for help came at 3:42 p.m. These uncontested and incontestable elements seem to me sufficient. (…) We know that the mother left on foot because the person who was supposed to pick her up was late, Madame was certainly confused, but she did go to the Red Cross with the person who was able to take her. drive there. Jimmy K. was alone, he disputes the facts but is unable to give a plausible explanation while accusing Elodie in a very risky way. (…) The reversal of Mr. came when Mr. K. discovered that his companion had a new companion. (…) The declarations of Mr. are changeable and incoherent, they are therefore not very credible, the most appalling version is to indicate that he changed the diaper of his child, the diaper of this all-white child, like a puppet. (…) Mr. would have panicked, but under these conditions, why take fifteen to thirty minutes to change the child? »

“Violence is his language”

The qualification retained (violence by ascendant on a minor under 15 years old having caused death with the intention of giving it) is the right one in the eyes of the Advocate General. “We do not want to kill but we want to be violent and this violence leads to death”, will have underlined the Advocate General, excluding any clumsy act.

The accused is in a state of general and perpetual recidivism due to a conviction for destruction by dangerous means, an offense punishable by ten years in prison, pronounced in 2014. His personality worries. “Violence is his language, it’s his word, the slightest futility, the lack of cigarettes for example, which was the case on April 3, 2020, can make him violent”.

How to sanction Jimmy K.? “I will not request life imprisonment, sir is already punished for life by the weight of knowing that he killed his son. (…) The risk of recidivism is all the greater as the gentleman is in denial. Jimmy K. was accompanied in a socio-educational way from the age of 6, everything was done to allow Jimmy K. to evolve, but today, all the signals are red! In view of the seriousness of the facts, in view of the personality of Mr., I am going to ask you to condemn him to a significant sentence, 30 years of criminal imprisonment”.

The Assize Court sentenced Jimmy K. to 25 years’ imprisonment. Placed in pre-trial detention since April 2020, the convicted person will have to respect strict socio-judicial monitoring including a treatment order upon his release from detention.

“Five days, by chance, the duration of this heavy trial corresponds to the duration separating April 3 from April 7, 2020, from the care of Kevin to the day when Madame gave her consent to disconnect her baby. Five days of suffering, five days of legal battle to repair nothing, five days during which you go from the role of ordinary citizen to the role of judge alongside magistrates”, will have underlined Me Connault to the address of the jurors in the introduction of his pleading.

“The truth is complicated to say, complicated to imagine and perhaps also to assume. My role is not to bamboozle you, to twist your brain, we are not on TV, my role is to show you that a truth is sometimes difficult to determine, to explain. (…) This family was plunged into a plural precariousness, first of all a financial precariousness, yes, in 2020, in full confinement, people were starving, had no more electricity and did not even have nine bullets, less than the price of a packet of cigarettes, to have this famous Red Cross package delivered. (…) The atmosphere, the context at the time of the events, you experienced, you experienced the fear linked to the pandemic, we did not know where we were going, a feeling of panic invaded us, we were united by the fear, people showed unusual behavior, confinement was the accelerator of certain disorders”.

No one can ignore a context that will have notably harmed the investigations. No real consideration of the alleged violence committed on March 27, 2020, absence of a Criminal Identification Technician (TIC) on April 3, 2020… One thing is certain. “Yes, Kevin died as a result of violence, violence committed without intention to kill. (…) Yes, Mr. says he changed Kevin when he was all white, the reasoning that you would have adopted, immediately alerting the emergency services, he, with his difficulties, he does not adopt it. (…) There are no confessions, no confessions from the gentleman, no confessions from the lady, the statements of the gentleman have fluctuated, but he has not changed his position on the merits, he repeats not not to have abused his son”.

So, if it’s not him, “it may be the mother” as the defendant said at the start of the proceedings. Me Connault was surprised by this “hasty departure, on foot, to hitchhike, in full confinement, leaving on foot, it can be likened to an escape”. The defense attorney pored over Kevin’s mother’s schedule. “Elodie lied in police custody about the conditions of her departure to Chaumont. (…) At 1:59 p.m., Elodie’s phone reached Rimaucourt, it reached Condes at 2:31 p.m., Mrs. M indicated that she came to pick her up between 2:30 p.m. and 3 p.m., this version on this use of the time changes everything! In concrete terms, the mother, in the eyes of the defence, could have committed violence before her departure. The child would then have been discovered, “all white”, by the father.

Yes, Jimmy K. is violent. Yes, Jimmy K. beat his companions. But a lot of people say, “abusing a child, Jimmy, doesn’t bring him together”. And then… “A witness from outside the family says it, Madame couldn’t stand her kids, it allows us to roughen up an idyllic image”.

Other point. Jimmy K. expresses no emotion. “Monsieur did not cry in police custody as indicated by a false report, we would have condemned Meursault because he did not cry at the death of his mother, that is the logic, the reality is well different”, will have thundered the defense lawyer in reference to “The Stranger”, masterpiece of Camus.

Jimmy K. is also a difficult childhood. “While I was learning to read, Jimmy, he was being touched in the toilet, while my parents were correcting my homework, Jimmy, his parents, they were correcting him. Jimmy has a disability, he doesn’t think and reason like us, he simply tries to adapt to a society he doesn’t understand, without knowing how to read and write. (…) Is a child born violent? No, he becomes one, this violence has been learned, it has also been suffered. (…) What we want is that he does not start to show violence again the day he leaves prison. (…) Mr. started working with a psychologist whom he sees every week. (…) He learns to contain himself, to reason, to reason with himself”, noted Me Connault before calling on the jurors to remain faithful to their oath, not to be carried away by hatred, to render a decision in “women and upright men”. “You who touch the divine by deciding the fate of a man, judge the good! »

A criminal qualification was retained in the context of the violence committed on April 3, 2020, violence which led to the death of Kévin *. Jimmy K. was also accused, on the basis of two testimonies, of having committed violence on his son on March 27, 2020 during a stormy evening spent with friends in misfortune. Kévin would have been particularly shaken on this occasion. “The people with whom Jimmy, his partner and Kévin had been welcomed, spoke of these shakings even before April 3, 2020, Elodie was informed of it, the facts were reported to the investigators! The two witnesses maintained at this bar, albeit with inconsistencies, that shaking took place on April 27, 2020”, will have underlined the Advocate General.

“If nothing sows doubt in your mind, if you believe so much in medicine, you will not be able to condemn Jimmy K. for the violence of March 27, 2020, the child would have been shaken on this occasion, but no previous sequelae has been identified, everything is based on the statements of a man with a brain holed by cannabis and on those of his companion who would add a little more if she were heard in ten years. With regard to the facts of March 27, 2020, the investigation was incomplete”, will have replied Me Connault. The defense was heard, the court acquitting the accused of this offence.

*Name has been changed.

“Can an alteration of discernment be retained, was he in other words half mad? Nope ! (…) Mr. did not show any sign of impaired discernment during these four days of debates”, will have underlined the Advocate General. Me Connault will not have hidden an embarrassment relating to the conclusions and explanations put forward by the expert psychiatrist. “I did not necessarily understand, in 2017, Mr. Mr.’s discernment is impaired due to a mental deficiency and difficulty controlling his emotions, in 2020, the findings are identical, we are not far from the copy-paste, but this expert does not retain the alteration. (…) I am ashamed to read this report”. The court will not have considered that the accused had a mental or neuropsychiatric disorder that impaired his discernment on April 3, 2020.