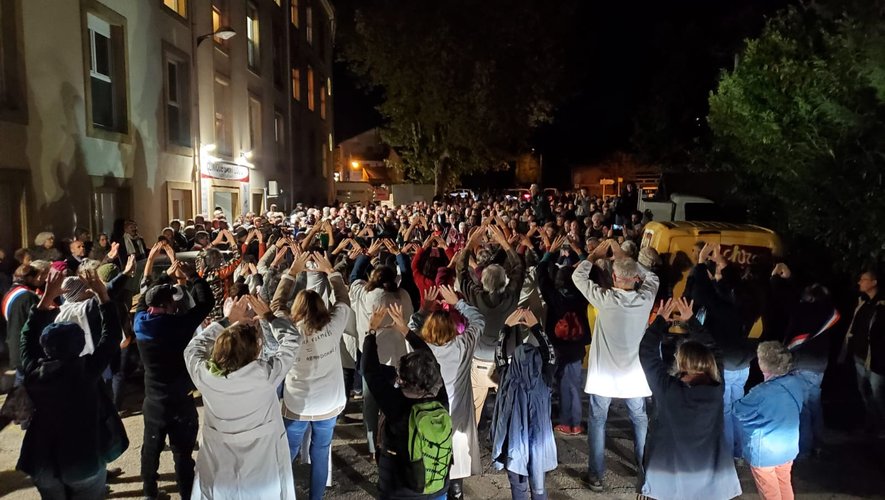 From now on, we must also find emergency physicians and pediatricians within a month. Impossible mission ?

“She won’t make her baby on her own”. In front of the 500 demonstrators massed Thursday, November 10 in the evening in front of the Saint-Louis clinic, the beautiful and tonic choreography produced its effect. But the words of Goldman remixed with Gangeoise sauce leave a bitter taste in the mouths this morning. Just over a month away from a dreaded deadline, the situation seems inextricable for motherhood.

A few weeks ago, its survival was just linked to the recruitment of two or three obstetrician-gynecologists to compensate for the departures of doctors Maïstre and Liebens. Today, due to the announcement of the resignations of the group of anesthesiologists and a paediatrician, it is a complete team that must be reconstituted by December 15.

How do you judge the current situation of the Ganges maternity ward?

I don’t have a doctor! Neither gynecologists nor pediatricians nor anesthesiologists. I need to find eight doctors. It’s impossible. We have two gynecologists who will continue to practice in town. It prevents me from recruiting three for the clinic. In Ganges, there are patients for three gynecologists, not for five.

Why this deterioration since October?

The anesthesiologists do not want to provide emergency digestive surgery and cesarean section because if there are two patients at the same time – and this was the case – the risk is too great. The group of six anesthesiologists therefore decided to leave. And then I have the pediatrician who, given the difficulties, tells me that he will also go away. It becomes mission impossible.

The prospect of taking motherhood out of the private fold and into the public domain has been put forward. What do you think ?

I am absolutely not against it. I gladly give permission. But the public will be completely unable to assemble a team of gynecologists, anesthesiologists and pediatricians. In January 2022, they were asked about a reinforcement. They replied in writing that they did not have the capacity to help us.

In Montpellier, there is already a lack of anesthesiologists and gynecologists to be able to take care of all the patients of the CHU and the territory. The request of elected officials for maternity to change status does not pose any problem to me, but it will be impossible, in fact, to recruit, even in 6 months, even in 1 or 2 years.

What is the solution, then?

I carry all the criticism and the nasty looks of the population. But I can bend over backwards or belly dance, I don’t have a doctor. If there is no volume of activity allowing the safety of the care, it is necessary to stop and this, whatever the activity.

The considerable impact of the numerus clausus

Mission impossible? In such a short period of time, it looks like it. Recruitment efforts for gynecologists alone have so far yielded nothing. So adding new recruitment challenges in a context of too late an end to the numerus claususwhich will maintain a shortage of specialists in France at least until 2030…

Suddenly, these gloomy prospects create tension in Ganges. Thursday evening, some of the elected officials expressed distrust of the Cap Santé group, which manages the Saint-Louis clinic and the maternity ward. Organizer of a demonstration that drained a lot of elected officials in front of the clinic on Thursday evening, the Defense Collective had harsh words for Cap Santé, accused “to do everything, without saying so, so that the activity ceases”. “There is a lack of sincerity on the part of Lamine Gharbi. The medical risk of removal is more serious than the risk of the competence of the temporary workers”launches Bruno Duck.

Towards a shift from private to public?

To prevent mistrust from being established, the idea of ​​taking maternity out of the private fold to negotiate a passage into the public sphere was launched by Michel Fratissier. “From Monday, we will ask Didier Jaffre for an appointment (director of the Regional Health Agency, editor’s note) to discuss this important issue”, indicates the mayor of Ganges. Lamine Gharbi is not against it.

If the ARS and the State do not oppose it on their side, this would make it possible to widen the circle of CVs and to hope to obtain for a few weeks or a few months the help of the neighboring CHUs to extend the recruitment time. . Objective: to achieve, in the long term, the constitution of a pool of doctors present in situ in a punctual but permanent way, as has, for example, been promoted in Auch (Gers). The next congress of mayors, on November 22, should be the occasion for an exchange in this direction with the Minister of Health, who has promised it to several local parliamentarians.

In the meantime, the weeks go by. Will the Ganges maternity hospital close on December 19? She could at least find themselves without a doctor and in cessation of activity, the time to provide for recruitment. “We can always hope for a miracle but it will be complicated”admits Michel Fratissier.

If the future of the Ganges maternity hospital is written in dotted lines, this is not the case for the Saint-Louis clinic, which houses it, and whose lights are generally green. The establishment is doing well, particularly in terms of surgical procedures, which have never been so numerous.

Other excellent news: the upcoming arrival of an MRI that the Regional Health Agency has confirmed and which is announced for the end of 2023. “While there are fears about maternity, there is, on the other hand, no concern about the future of the clinic. The Cap Santé group is very attached to the Ganges clinic and to the quality of care that are lavished there”assures Michel Fratissier.