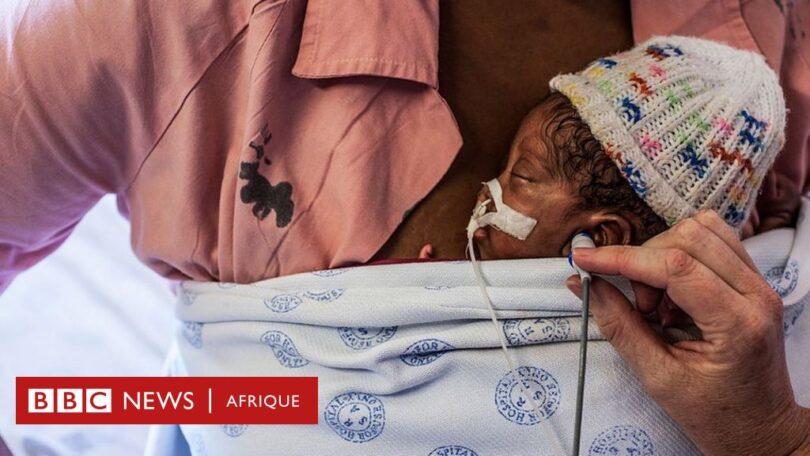 In March, Ojoma Ekhomun, a Nigerian mother, gave birth to her first child after just 31 weeks of pregnancy.

Her son, who weighed only 700 grams, was placed in an incubator and when his weight reached one kilo, doctors from the Amuwo Odofin Maternal and Child Center in Lagos took him to his mother’s chest, their skin naked being pressed against each other.

“He is very safe here,” says Ekhomun, the 26-year-old mother. “I appreciate the warmth between the baby and myself”.

This method, first proposed in 1978 by two pediatricians at the maternity ward of San Juan de Dios Hospital in Bogota, Colombia, has been endorsed by the World Health Organization (WHO), the health body United Nations.

Previous guidelines advocated the use of incubators.

The WHO said the new guidelines are important for areas where electricity supply is non-existent (or unreliable) to power incubators.

Implementing so-called ‘kangaroo care’ and encouraging breastfeeding immediately, rather than after babies have stabilized, could save up to 150,000 lives, new research has shown. per year.

According to the WHO, prematurity is an urgent public health problem. Every year, an estimated 15 million babies are born prematurely, more than one in ten births worldwide, and an even higher number – over 20 million babies – are born with low birth weight. This figure is increasing, and prematurity is now the leading cause of death for children under five.

Premature and underweight babies can face a wide range of problems at birth. Without a store of body fat, they may struggle to regulate their own temperature and lose heat quickly. Incubators are used to help them maintain a stable temperature.

Low- and middle-income countries have the highest number of preterm births (nearly four out of five).

By securing the baby in an upright position on his mother’s chest so that their skin is in direct contact, he can share his body heat to maintain a stable temperature and greatly reduce the risk of hypothermia during his first days of life.

This inexpensive treatment can be applied on a large scale and relieves the burden on healthcare institutions.

Unicef ​​also highlighted research that points to benefits for both mother and child. These are “kangaroo care”:

Kangaroo care, however, requires a strong commitment: underweight babies need continuous skin-to-skin contact for at least 18 hours a day. For the mother, this only means a few hours of break.

But Antin Ehi, a 40-year-old mother from Lagos whose daughter was born prematurely in April, cherished the opportunity to be so close to her baby girl, whom she named Ehi.

With the help of staff from the Lagos Maternal and Child Care Centre, Antin Ehi learned to wrap her newborn daughter against her chest with cloths when her condition stabilized.

“I never really had a chance to learn more until I found myself in this situation,” she says. “And honestly, it was a great experience. Normally we would put on a nightgown and put it inside, against my body to feel the heat. It was funny but it was nice.

“She can stay there all day. Once you place them there on your chest, they’re just there, calm. They don’t bother. They just feel relaxed.”

Some small-scale studies also suggest that babies who receive kangaroo care may even cry less and sleep more peacefully.

Although “kangaroo care” is primarily intended for the mother, a growing body of research suggests that fathers can participate in skin-to-skin contact and achieve similar results.

For Ojoma Ekhomun, who has just given birth, this technique allowed her to protect and care for her baby boy when he was most vulnerable.

Even now that he’s out of harm’s way and growing every day, she intends to continue wearing him on her chest.

“I will continue until [mon] baby is starting to walk,” she says.

(This story is largely inspired by an article written by Ayodele Johnson for BBC Future.)