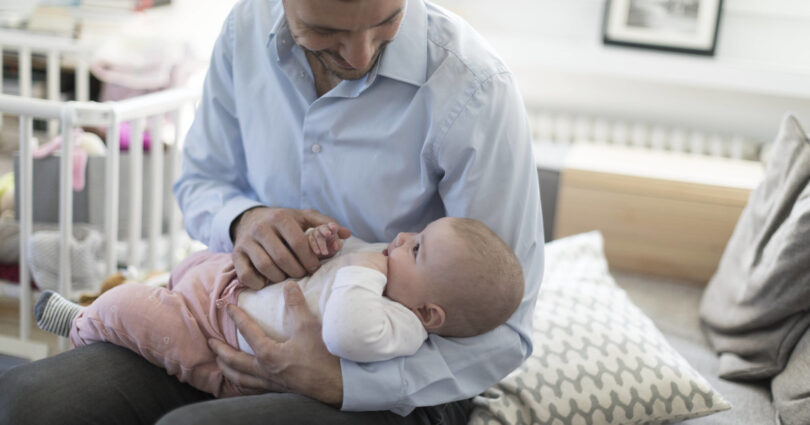 Postpartum depression is an illness that affects 17% of mothers in the years following the birth of their child. What is perhaps less known is that this disease can also affect fathers. The prevalence of postpartum depression among them is around 5% in the first months. However, it seems that paternity leave can have a beneficial effect and reduce the risks, according to a scientific study published on Wednesday in the journal Lancet Public Health.

“We have recently been interested in the health of fathers after the birth of a child, says Maria Melchior, research director at the Pierre Louis Institute of Epidemiology and Public Health of Inserm and Sorbonne University. in Paris, and co-author of the study. Depression in fathers follows the same process as in mothers: it occurs within a year after the baby’s arrival, not necessarily in the first weeks, but rather within 3 to 6 months. The risk factors in men are multiple and mainly psychosocial (while in women there are also hormonal factors).

“The birth of a child involves a radical life change,” explains the researcher. This is a happy time, but one where the parent may be cut off from their environment. The life of a couple is turned upside down, with sometimes tensions and conflicts, not to mention the decrease in sleep. It has been well demonstrated that a lack of social support is at the root of depression in the father or the mother.

With fellow sociologists and epidemiologists, the researcher looked at the effect of a two-week paternity leave on the risks of postpartum depression in fathers and mothers. The scientists had access to the cohort of Elf families, unique in France, and representative on a national scale. In their study, they were able to study 10,975 fathers and 13,075 mothers of heterosexual couples. The participants agreed to answer a long questionnaire by telephone two months after the birth of the child. Analysis of the data, obtained in 2011, demonstrated a 26% lower risk of postpartum depression in fathers who took two weeks of paternity leave compared to those who did not.

“Seeing these results, we realize that fathers play very important roles and that it is essential to integrate them, comments Maria Melchior. Being able to get involved in the family is favorable, it helps the man to find his place, and to be active in the care of the child. Previous studies have shown that men who take paternity leave take more care of the baby but also of household chores. This allows them to better manage the constraints, and to maintain good mental health.

These results were obtained by taking into account the socio-economic and medical factors of the families, specify the authors. “This is not a randomized trial where we can randomly assign which man takes paternity leave or not, which induces possible biases related, for example, to work or health history, explains the researcher. There are differences between dads who take those two weeks and those who don’t, so we have to take those factors into account.”

It is precisely such variables that could explain the result observed in the mothers. Indeed, scientists did not observe a beneficial effect in mothers when fathers took the two-week leave. On the contrary, in these women, the risk of postpartum depression seems slightly increased, by 13%. “We would expect it to be favorable for these women,” says Maria Melchior. I think that a bias related to the history of depression of the mothers could explain this result. If the mother is more fragile, the father is more likely to take paternity leave. And besides, two weeks may not be long enough to see a beneficial effect.

Always in the Lancet Public Health, this Wednesday, a team of Swedish researchers focused this time on the impact of parental leave on the mental health of the couple, from an international point of view. These scientists carried out a systematic analysis of 45 works on this question carried out in Europe, the United States, Canada, Australia, Chile and Japan. Their study concludes that the use of parental leave reduces mental disorders, including depressive symptoms, psychological distress or burnout, especially among mothers. And the effect would be lasting over time, according to the authors.

One thing is certain for the French researcher, finding ways to reduce the risk of postpartum depression, in fathers too, is important to allow good psychological and cognitive development of the baby, especially during the first 1000 days of life which are a key step. “Depression acts at the level of interactions with the child, of the attention given to him. And so allowing families to spend time together, to face challenges, is very positive.”

The team of scientists led by Maria Melchior wants to study the effect of longer paternity leave on postpartum depression, especially in the mother, again thanks to the Elfe cohort. In 2021, France increased the duration of this leave to 28 consecutive days. Paid paternity leave of two weeks came into force in Switzerland on January 1, 2021.