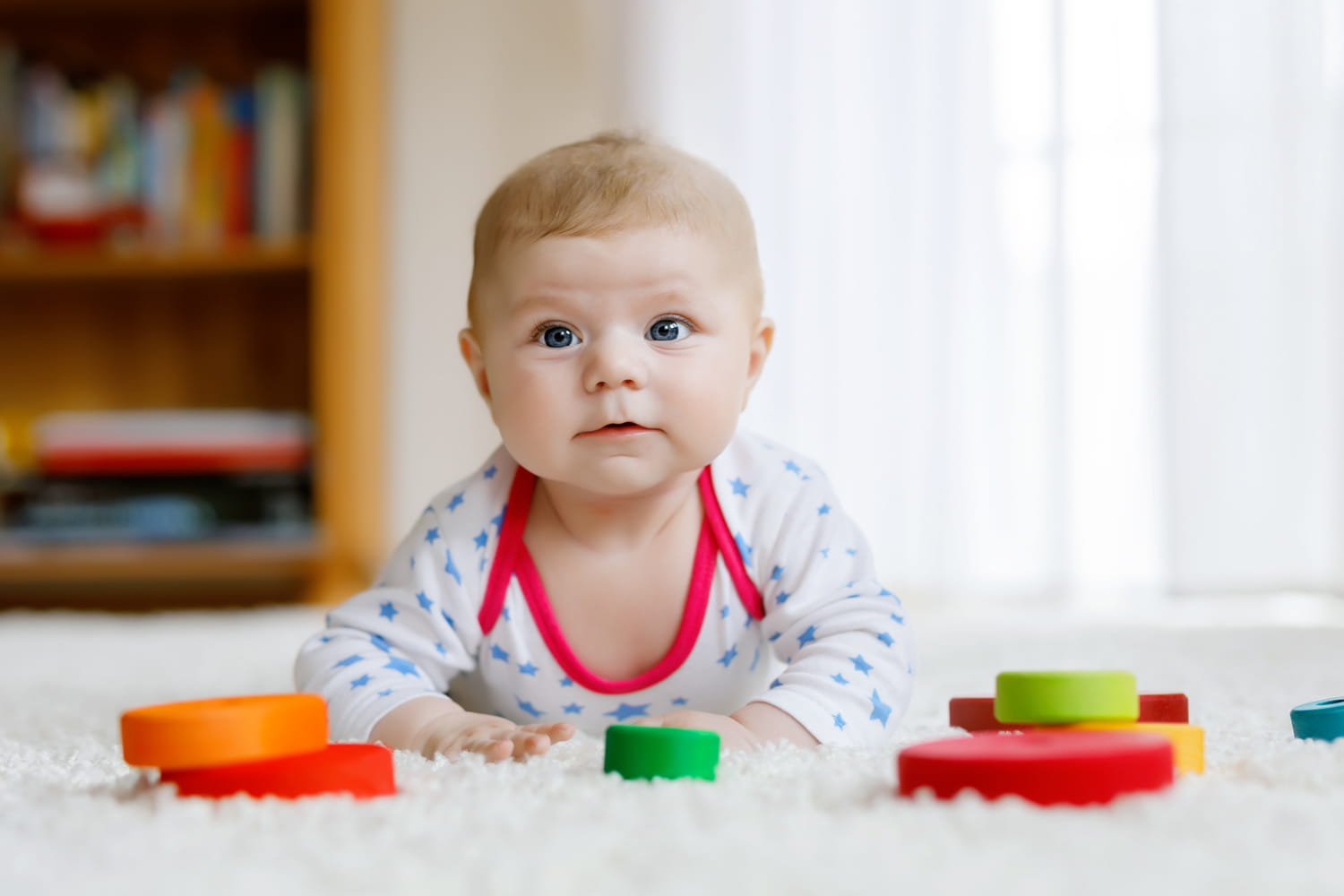 Your baby is entering his third month! Every day it grows a little more and evolves. You may also need to hand it over to someone to get back to work. Health, awakening, activities, diet, here are all the answers to the questions you ask yourself. Something to live this new stage gently with baby.

Your cherub is taking a new step, he is now 3 months old. As the days go by, baby wakes up a little more, he becomes more active. This is an important step for the child, which is accompanied by many changes, particularly in terms of his interactions with those around him, his sleep, his diet and his health.

What does baby do at 3 months?

At the age of 3 months, baby explores the world and is attentive to everything around him. He smiles more and more, and even begins to have some bursts of laughter and some facial expressions. He sees better, so he follows everything that interests him with his eyes. He tries to discuss with you, chirping more and more. He likes you to talk to him and pays attention to what you tell him. More than words, it’s your facial expressions and your tone of voice that he understands. On his face, some reactions and emotions can be guessed. He try to interact. He is also attentive to noises. Also, as soon as he hears a sound, he automatically turns his head and stops all activity to concentrate on it. On his face, some reactions and emotions can be guessed. He still has a lot to learn, but he is on the way.

He fidgets, stirs a lot, shows his contentment and discontent

To stimulate baby and his senses, you can take advantage of the outdoor walks to introduce him to new things. As he is increasingly curious, it can be beneficial for him to touch tree leaves, feel the grass under his feet, grab a piece of moss or a stick. Outside, he will also be able to hear the surrounding noises, those coming from nature, birds, bicycles or even the voices of other people. This will surely intrigue him at first, he will want to understand what is going on and he will be attentive to the smallest details. To encourage baby, you can also make him smell new smells, like the smell of a plant, fruit or cheese. The idea is to push him gently to activity, to motivate him and to stimulate him overall.

If baby already holds his head well, and shows a curious temperament, you can put him facing the world in the baby carrier. At first, do it for short trips, so that he can quickly find his attachment figure. But if he is a keen observer, baby will be delighted to enjoy the outside world to the reassuring sound of your voice!

What activity to do to occupy a 3 month old baby?

At 3 months, your baby begins to use his hands more. First, he brings them to his mouth and sucks his fist. He also begins to grab objects that are within reach. The rattle is undoubtedly one of his favorite toys. Choose it in a bright color, easy to grip and in a washable material. He will like it all the more because he will easily make noise. Show him that by shaking his toy, he gets sounds. Sitting in his deckchair, he will also love his portico. If before he spent his time looking at the toys hanging there, he will gradually try to grab them. The ideal is that these small toys are of different colors and materials. Balloons and ribbons will also, no doubt, hold his attention. Warning: be vigilant and choose items that meet the standards in force, bearing the NF or CE inscription. You can also start putting baby on a playmathe will enjoy its bright colors and different textures.

What does baby eat at 3 months? Feed

Whether breastfed or bottle-fed, your three-month-old baby is now five or six feedings a day. Bottle rations are approximately 180 g. But then again, no need to worry if he doesn’t drink all of it at every meal. The important thing is that he grows and gains weight on a regular basis. If you have to go back to work, and you are breastfeeding your baby, you will probably have to wean him. Be aware that this step takes a bit of time, so don’t wait until the last moment. Start slowly with replace one of the feedings with a bottle, then two and so on. You do not have to delete all feedings and can keep those in the morning and evening, for example.

Baby sleep at 3 months: what rhythm?

As for adults, there are small and heavy sleepers and perhaps you are lucky enough to have come across a small marmot

At the age of three monthsyour baby generally sleeps a little longer, but if some are almost sleeping, not all of them find their rhythm as quickly. Baby makes the difference between the day’s sleep, and that of the night. He can start to lengthen his nights and sleep for 6 to 8 hours in a row, so we can say that he spends his nights. Nights that now start earlier, around 10 p.m. or around 11 p.m. If your toddler is still struggling to find his rhythm, don’t worry. Some children need a little more time, especially since at this age, nothing can upset their sleep. His awakening phases are also longer, from about one to two hours. Finally, to 3 months, it’s perfectly normal for your baby to sleep a lot !

What is the height and weight of a 3 month old baby?

When 3rd month visit, the pediatrician continues to check that your baby is growing well and gives you advice on his diet. It is possible that its growth slows down slightly at this time, but he weighs an average of 5.5 kg and is 60 cm tall. But keep in mind that each child follows their own curve! There is therefore nothing to fear, unless the doctor says otherwise. In any case, do not hesitate during medical appointments to ask your questions in case of doubt or questions.

Does the shape of a baby’s skull change at 3 months?

At this stage, your baby’s skull is still malleable and it is possible that you observe a slight deformation. Doctor Nathan then recommends to be attentive to it: “Beware of the risk of plagiocephaly (flat head). You should try to put your baby regularly on his stomach when he is awake on his carpet for example, or to turn him on his side“.

When does baby teething start?

To 3 month baby can drool for several reasons. As was the case in the second month, your baby may drool because he puts his hands in his mouth a lot while chewing on them. Another possibility: this can mark the very beginning of teething if this phenomenon is associated with other symptoms such as redness in the cheeks or diaper rash. Also, if you find that baby has red cheeksit may be the onset of teething. These inflammatory flare-ups can be painful and accompanied by other symptoms, including buttock irritation. If baby feels pain, do not hesitate to give him paracetamol to relieve him. The teething rings to keep cool have also proven themselves!

What are the positions of a 3 month old baby?

In general at 3 months the child tests his gross motor skills step by step and adopts several positions:

Why baby puts everything in the mouth at 3 months?

Baby is at the stage where he discovers the world around him, and constructs himself in relation to it. Thus, when he grabs objects, toys or even his hands, he will have the reflex to put them in his mouth to get to know them better. He will learn about textures and flavors by tasting and chewing them. However, be careful, be careful what he can put in the mouth. Avoid having objects in its path that it could inadvertently swallow (balls, batteries, pieces of glass, plastic, etc.) and even sharp objects.

On your side as a parent, at 3 months, you may soon, if you haven’t already, start working again. This is a big step for which baby must be prepared gently. Especially if you are breastfeeding! He will no longer be alone with you, he may open up to other people. Then arises the issue of custody. Childminder, crèches (collective, parental, etc.) or a person coming to your home. Know that, whatever the mode of care you choose, you will be entitled to assistance from the CAF: the supplement of the mode of care. If you choose a childminderit is essential that it be accredited. On the one hand, because you will have guarantees on his skills, on the other hand, because you will not have help from CAF if he is not. In any case, it is necessary that this change is made gradually and that baby gets to know the people who will take care of him during the day. A week of adaptation is often planned in nurseries, sometimes even two. At the nanny, you can proceed in the same way. Thus, at first you will stay there with him, then you will leave him a little alone, then longer and finally all day, including meals.

Little advice : Before all this, you too can gradually get used to these future days without your baby by entrusting him for a few hours here and there to his grandparents or someone you trust. You will be able to give yourself time for yourself, and for the child, this will allow him in advance to adapt to this new routine.