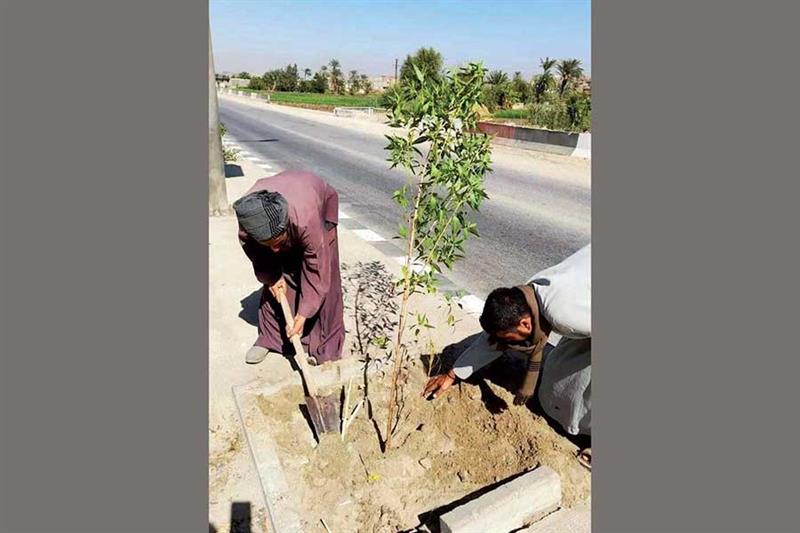 ” Plant moringa in front of the douar thanks to its nutritional virtues and its health benefits. This plant purifies water and helps in soil conservation. Its leaves, flowers and seeds are very nutritious. It is possible to incorporate dried moringa leaves into your daily cooking. Or reduce the leaves to powder and add it to the flour to prepare cakes, savory or sweet cakes. Consume one to two teaspoons daily to reap its medicinal benefits. Incorporate its seeds into wastewater to purify dirty water and protect the soil… “. These are the theoretical and practical lessons learned by women farmers in the New Valley Governorate, 731 km from Cairo.

This is an initiative that was launched last year on the benefits of moringa. 300 women farmers arrived from three villages: Nasr Al-Sawra, Al-Cherka and Al-Mounira to attend the seminars. Representatives of the Food and Agriculture Organization of the United Nations (FAO) are making women who cultivate the land aware of the enormous potential of this fellah’s friend tree. The objective of these workshops is to enable women farmers to build a sustainable economy around this activity.

Called ” the tree of Life ” Where ” the tree of the poor », Moringa can serve as a source of food and income for women and young people living in disadvantaged areas and remote regions. ” Because it is a tree that provides two benefits, namely coping with the effects of global warming, while at the same time providing food explains Dr Achraf Al-Sadeq, a native of the New Valley and responsible for the project with the FAO, offering each resident two plants to place in the ground in front of her home.

The choice of moringa as the spearhead of sustainable production is not taken by chance. This plant has very special characteristics. ” Its seeds are used to purify water, its pods and leaves are cooked like vegetables such as molokhiya or spinach, its fragrant white flowers are said to be aphrodisiacs, its roots are used to produce a condiment notes Oum Al-Hanna, a resident of Sohag in Upper Egypt. The latter tells her story with the tree which has contributed to increasing her annual income. ” Today, I manage to earn LE 350,000 per year, much more than my income before. A feddan (4200 m2) can contain 700 trees. And a single tree brings 10 kilos of leaves and a liter of oil. I sell the 10 kilos of leaves at 500 LE and the liter of oil at 700 LE “says the young woman with precision.

The history of moringa in Egypt began in 2010 when Dr Aboul-Fettouh Abdallah introduced his seeds there. He discovered this miracle tree for the first time in Zambia, when he attended the conferences on the same subject. Before his death in October 2021, several TV shows invited him to talk about the usefulness of this unique plant. Dr. Aboul-Fettouh Abdallah, former director of the Egyptian Moringa Scientific Association, has completed 13 doctorates on the virtues of this plant of great importance for man.

A fast-growing tree, moringa can produce between 15,000 and 25,000 seeds per year. Moringa takes between 3 to 6 months to give its first leaves and a year and a half before making the first harvest of its fruits. According to the study Moringa Genus: A Review of Phytochemistry and Pharmacology, moringa leaves could also stop the proliferation of cancer cells and strengthen the immune system. This is why the oncologists of the 57357 hospital saw the need to grow 200 trees in 2017. “ Rich in antioxidants, it contains flavonoids considered anti-cancer thanks to their ability to block the development of cancer cells. Nicknamed the miracle tree, in reference to its many medicinal virtues, moringa increases the quality and quantity of white blood cells. It also stimulates the synthesis of antibodies and its antioxidants are great allies in fighting disease. “says Dr. Chérif Abdel-Aal, Chairman of the Board of Directors of the hospital.

Within the hospital, officials resorted to ” Nutritional recovery project for children, pregnant women and breastfeeding women launched in 1997 by an American NGO in collaboration with a Senegalese NGO. This project was launched to alleviate malnutrition problems, with the distribution of moringa powder. This powder, with a strong green taste, began to be consumed mainly in soups and spicy meals at the 57357 hospital in order to increase the nutritional value of the dishes. Nutritionists within the hospital have added moringa powder and leaves to most daily meals.

Moringa is considered a source of food and income for disadvantaged women and young people in remote areas.

Given its beneficial effects on health, the association ” Plant a tree has participated in the planting of moringa in different districts of Cairo, namely Al-Asmarat, Zeitoun, Aïn-Chams, Hadaëq Al-Qobba, Matariya, etc. especially in front of mosques, churches, clubs and inside schools. This initiative was started a few years ago to introduce children to the importance of the color green in our lives.

Moringa is also a friend of the environment, it adapts to climates and contributes to maintaining the balance of our ecosystem. Officials therefore saw the need to plant 400,000 trees in the desert regions of many governorates: the New Valley, Siwa, Fayoum, South Sinai, Ismailiya, Minya, Sohag, Beni-Souif, Assiout, Aswan and Louqsor.

” It is a crop that has the ability to absorb carbon dioxide 20 times more than general vegetation. Its tuberous root allows it to go without water for several months, which is why it is also called the tree that never dies, and which is why it can be found in very arid areas such as the sahara says Dr. Achraf, while asserting that nearly 5 billion people could face water shortages by 2050 due to climate change, according to the United Nations. So we need crops with limited water.

Known to the Ancient Egyptians

The Ancient Egyptians used it, 7000 years ago, in the treatment of several diseases and for the benefits of its sacred pharaonic oil, considered in this period as one of the secrets of mummification. In 1895, the Egyptian author Ahmad Effendi Kamal wrote in his works about the importance of using its leaves and plants as an effective treatment for various ailments. Among the Greeks, moringa was also appreciated for its many benefits and the knowledge of its use was transmitted to the Romans. Subsequently, it continued its expansion to the Mediterranean thanks to the ease of adaptation to hot climates.

Also nicknamed ” mother’s best friend », Moringa has a galactogenic effect. It is ideal for pregnant women and also for young mothers. Among the benefits of moringa, we find the increase in the production of breast milk. And, at the same time, the tree of life makes the milk more nutritional for the baby. Thanks to moringa, mother and child will have all the essential nutrients during this period. ” Dr Amal advised me to consume moringa herbal teas, supposed to promote the production of breast milk says Oum Dina, the new mother, originally from Sohag, who did not have enough milk for her baby. And the village gynecologist advised a friend of hers to drink herbal teas to reduce her menstrual pain.

Extremely rich in antioxidants, moringa powder is added to the meals of cancer patients.

It is thanks to all its positive effects on people, land and wallets that we encourage the cultivation and production of moringa on the terraces of houses. This could, moreover, help the ordinary citizen who lives in working-class neighborhoods to use its seeds to purify water.

” To make 10 liters of water with moringa seeds drinkable: Pour 2 spoonfuls of powder into a glass bottle containing a bottom of clean water and mix everything until a whitish liquid is obtained. Let the mixture sit for 10 minutes. Stir the 10 liters of dirty water “. It is a recipe offered by Dr. Mohamad Abdel-Wahab, head of the plant department at the Center for Scientific Research. He pauses for a moment and then concludes with precision: The antibacterial properties of the plant kill up to 95% of bacteria and viruses present in water, making it drinkable in the most remote regions of Egypt “.