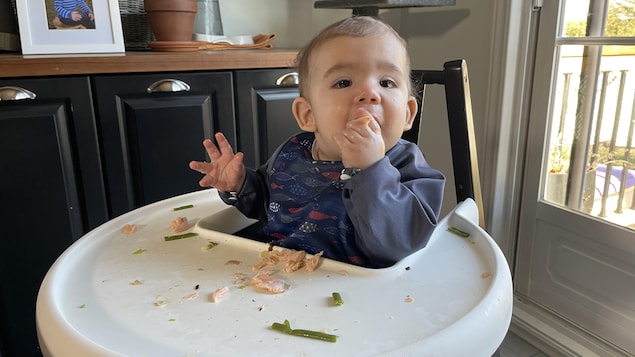 Child-led diversification (CMD) is an increasingly popular approach to introducing solid foods to babies. Parents thus benefit from a stage of development where the infant brings everything to his mouth.

It is an individual choice between traditional purees or solid foods to start feeding the six-month-old child, for whom breast milk is no longer sufficient to provide the necessary nutrients.

Gaël’s parents find it convenient and pleasant to prepare the same meal for the whole family and share it at the same time as their baby.

We got the OK from the doctor, so we started […] and from the first day, he was freaking out over food, really! After all, for babies, it must be better to eat a salmon with lemon rather than a slightly bland mashed cauliflower!explains Andréa Laurence Tardif, Gaël’s mother, who had already experienced the DME with her 4-year-old eldest.

Since then, she has not stopped learning about this method developed by a nurse from the United Kingdom several years ago.

The science is not yet clear on the benefits of this approach. Comparative studies are rare and have not demonstrated the benefits that parents already attribute to EMR. For example, we cannot measure the improvement in fine motor skills with autonomous feeding.

Nutrition professor at the University of Montreal Véronique Gingras used this approach with her own daughter because she finds the idea that the baby listens to the signals of hunger and satiety that it feels interesting. But she can’t say that research confirms that DME is better than adult-led feeding with a spoon.

To my knowledge, there have only been two large studies so far that have shown that there are no negative effects with EMR: therefore no more risk of choking [qu’avec les purées, NDLR]no risk of nutritional deficiencies in the child either and no growth retardation or weight gainexplains Véronique Gingras, who is also a researcher at the CHU Ste-Justine.

Is this the end of baby purees? Maybe not, but more and more parents are embracing a new way to introduce solid foods: child-led diversification (DME). 6-month-old babies therefore attack pieces of broccoli or bananas with great pleasure…and quite a bit of damage too. Report by Anne-Louise Despatie

Judging from published books and online discussion groups, the approach is certainly in vogue among young parents, sometimes to the astonishment of grandparents. This is what advise nutritionist Sandra Griffin, who feeds a Facebook page, observes. Mom eats well and who is the author of a book on self-feeding babies.

A mother of four herself, she regularly answers questions about baby nutrition at conferences or online information sessions.

Because there are risks of choking, it is important to prepare food according to the capacities of the infant who does not chew yet, but rather crushes them with his tongue and sucks what he puts in his mouth.

But in puree or in pieces, foods served to infants six months and older must be rich in iron.

At Sainte-Justine Hospital, questions from parents about the EMR have been pouring in for four years.

Usually, occupational therapists love anything that stimulates independence in children. The DME is certainly an opportunity for sensory exploration and motor development for the six-month-old baby. But that does not mean that independent food should supplant purees.

There is a gain in fine motor skills and sensory exploration, but if meals last 60 or 90 minutes, two to three times a day, the child has fewer opportunities to handle toys which also contribute to his development [moteur]. Whether the child comes into contact with food or toys outside mealtimes, development will happen the same wayemphasizes Valérie Deslauriers, occupational therapist, coordinator of the Dysphagia Clinic at CHU Ste-Justine.

So there is no method that is better than the other, she concludes. That, I think, is an important message for everyone: [la DME] it’s a parental choice that may suit one and not the other.

Pureed or in pieces, you should not wait too long to introduce the baby to new flavors and textures: ideally between six and nine months, before he becomes more selective and less open to novelty around the age of twelve. month.

Over the past decade, the recommended age for introducing foods has increased from four to six months, as public health organizations and specialists in several countries want to prolong the benefits of breastfeeding.

The too rapid introduction of solid foods, before the age of six months, could also be associated with a risk of obesity.

The recommendations have also changed since 2015 with regard to allergens (peanuts, eggs, wheat, fish, sesame, soy, milk, etc.). Rather than avoiding them in infants, the World Health Organization now recommends introducing them one at a time, along with food. It doesn’t matter if they are mashed or in pieces.