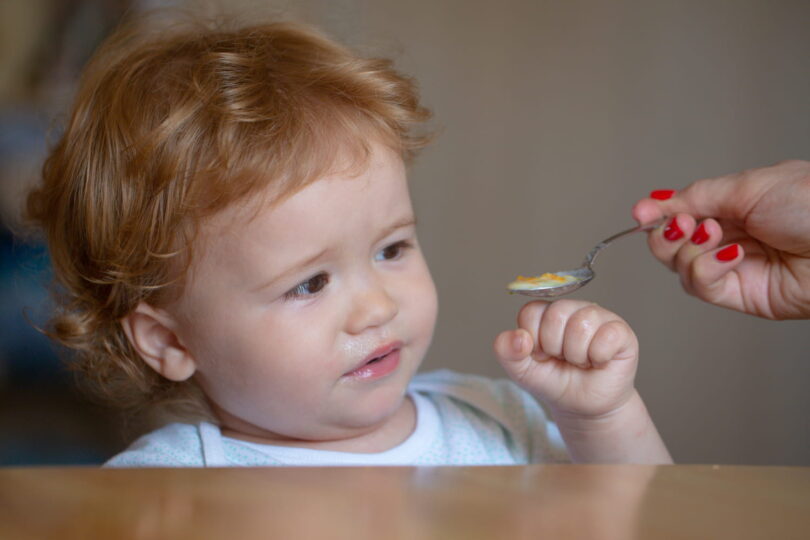 Infant anorexia is characterized by a food refusal of the very young. Very distressing for parents, this situation is however not irreversible. What are the causes of infant anorexia? How does it translate? What are the treatments ? Explanations with Dr Julie Le Foll, child psychiatrist.

Definition: what is infant anorexia?

Infant anorexia refers to a feeding difficulty that affects children 0-12 months. The child refuses the food given to him, and the more we try different approaches to force him to eat, the more he gets angry and refuses all food. The onset of disorders is gradual. “We no longer speak of infant anorexia in clinics for toddlers because it is too easily assimilated to anorexia nervosa when it has nothing to do with it. We prefer the term undernourishment, which covers infant anorexia, but also other trubles such as food selectivity, eating extremely slowly or the fact of imposing on the parents conditions to be nourished“, nuances Dr. Julie Le Foll. Anorexia in infants most often disappears on its own or thanks to medical monitoring. This anorexia in infants is to be distinguished from an anorexia reactive to an acute problem in the context of an infection, pain. In this case, the cause of the problem must be treated and everything is back to normal.

What are the symptoms of infant anorexia?

The infant affected by anorexia eats less and less or gradually swallows less liquid. When the parent realizes this (often the mother, during the feeding or the meal), he begins a psychological struggle with the child. Complications ensue in his relationship to food. Feeling the stress of the parent, the child refuses all food, then associated with the parent and the tension of the moment. It’s a vicious circle that needs to be broken. so that the child can regain healthy relationships with food.

The child must find healthy relationships with food

What are the causes of infant anorexia?

“Most often, infant anorexia is a multifactorial disorder which brings into play sensitivity factors related to the infant, its early history, pregnancy, childbirth or the fact that he was born premature“, explains the child psychiatrist. The cause can also be medical: pain caused by digestive problems such as a gastroesophageal reflux or even a esophagitisa viral infection such as nasopharyngitis or a otitis. “Because they are more fragile, these babies may develop feeding difficulties more easily. Environmental factors are often associated with, in particular, a parent-child relationship disorder occurring because the parent has difficulty adjusting to these eating difficulties and would have forced him to eat.“, she continues.

At what age does it occur?

Infant anorexia occurs between 0 and 12 months.

A clinical examination of the infant makes it possible to establish a viable diagnosis and to eliminate any other cause than that of anorexia. Parents should consult a general practitioner or a pediatrician first. The doctor will be able to give the advice adapted to the situation and try to regulate the anorexia of the child as well as possible. Therapeutic care puts an end to the vicious circle of refusal of food and the stress that this situation engenders, for the child as well as for the parents. Feeders are advised to pretend not to care about the child’s refusal to feed, by not commenting and reacting neutrally to refusals. It is also necessary feed the child trying gamesletting him eat dirty if he wishes and at the times he prefers. Release the pressure will help her to feed with craving again.

Releasing the pressure will help her feed cravings again

“Beyond the identification of these food difficulties, it is necessary to take care of the parent-child relationship because it is a real factor of improvement or aggravation of the situation. You should know that feeding difficulties in infants are extremely common and encountered by 25 to 40% of parents. This disorder is often transient and not serious, linked to factors such as infection, teething or GERD which will be quickly identified and treated. When no medical cause is found or it has been treated and no improvement has been observed, the doctor can refer the parents to a child psychiatrist. This will put in place developmental guidance, working on the relational aspect and showing the parent how he can help his child to reinvest food and enjoy eating, while reassuring him of his skills in feeding his child.“, adds the specialist.

Thanks to Dr Julie Le Foll, child psychiatrist at Bichat Hospital in Paris.