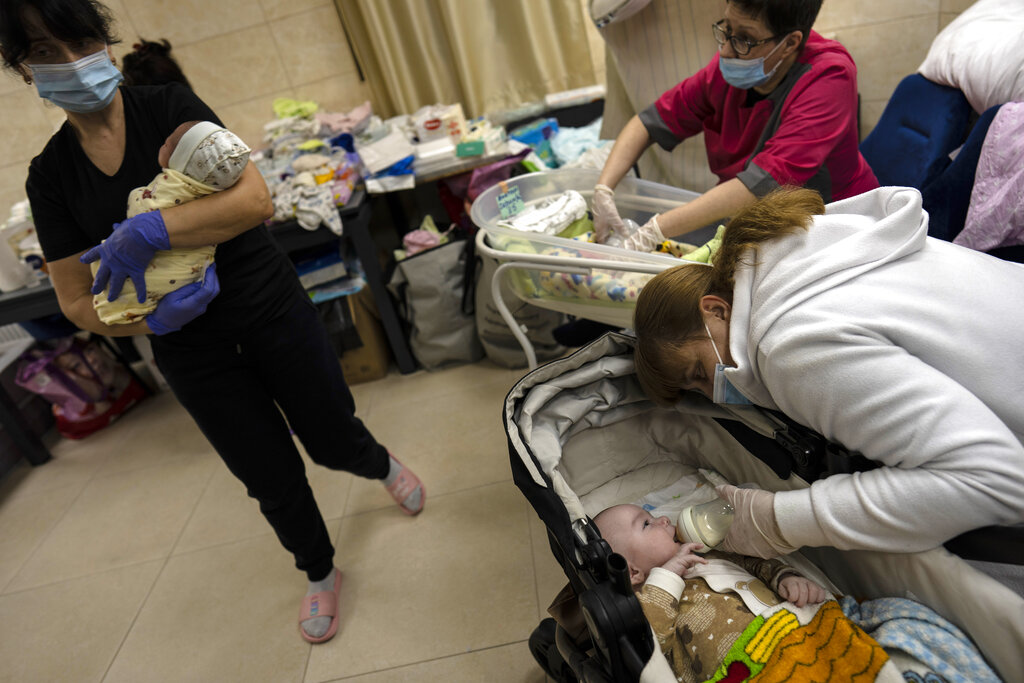 How can you continue to breastfeed your baby knowing that you risk transmitting the AIDS virus to him? This has been the reality for many breastfeeding mothers living with HIV in Ukraine since February 24, 2022, the date of the Russian offensive.

Health systems have collapsed in many occupied areas. Due to the lack of formula milk, many mothers who do not have access to their ARVs (antiretroviral therapy) breastfeed their babies, which increases the risk of HIV transmission from mother to child.

On this World AIDS Day, no mother should have to choose between starving her baby and transmitting HIV to the child.
Olena Stryzhak, president of the association Positive Women

On this World AIDS Day, “No mother should have to choose between starving her baby and transmitting HIV to the child… As a mother, I discovered that I was HIV positive and pregnant in 2000. I did not have access to the necessary HIV treatment. However, I was incredibly lucky to give birth to a healthy, HIV-free baby.”says Olena Stryzhak, president of the Positive Women association, whose cry from the heart we share here.

“Unfortunately, this is not always the case for HIV-positive pregnant women. The World Health Organization (WHO) recommends that HIV-positive mothers can breastfeed their babies, but only if they have access to ARV treatment and a viral load diagnosis every month”adds the activist.

But today, many new HIV-positive mothers have no choice. The ongoing war has devastated the country’s health system: more than 700 health facilities have been attacked and countless health workers and patients have been displaced, injured or killed, she said.

Despite remarkable results in the fight against HIV in recent years, Ukraine has the second largest HIV epidemic in Eastern Europe and Central Asia.

For the president of Positive Women, “HIV-positive pregnant women in Ukraine desperately need the help of governments and the humanitarian community to fight HIV contracted by the next generation of babies.” Access to health workers with sufficient experience in treating cases of HIV-infected mothers and preventing mother-to-child transmission – without stigma or discrimination – “seriously lacking, especially in the western regions of Ukraine, which host many internally displaced people”.

If her association was able to provide ARVs, basic drugs, health kits and food to mothers and their babies, “this does not cover all needs”she laments.

Other organizations, such as the Global Fund to Fight AIDS, Tuberculosis and Malaria, provided Ukraine with $15 million in emergency funding and delivered lifesaving medicines, equipment and supplies. lives – including generators to power health facilities without electricity. Positive Women has also received funding from the Global Fund to provide care and support to women and their children.

“Decades of struggle reduced to nothing?”

The activist calls on States and international organizations to do more: “We must not allow this war to undo the decades of struggle against mother-to-child transmission of HIV in Ukraine. We need to prevent the next generation of children from getting HIV, especially when we have the drugs to prevent it.”

On this World AIDS Day, think of the most vulnerable people suffering in Ukraine and help us start the year 2023 a little happier.
Olena Stryzhak, president of the association Positive Women

“On this World AIDS Day, think of the most vulnerable people suffering in Ukraine and help us start the year 2023 a little happier“, concludes the one who has been fighting for years against the virus and for all those who fight against the disease across Ukraine.