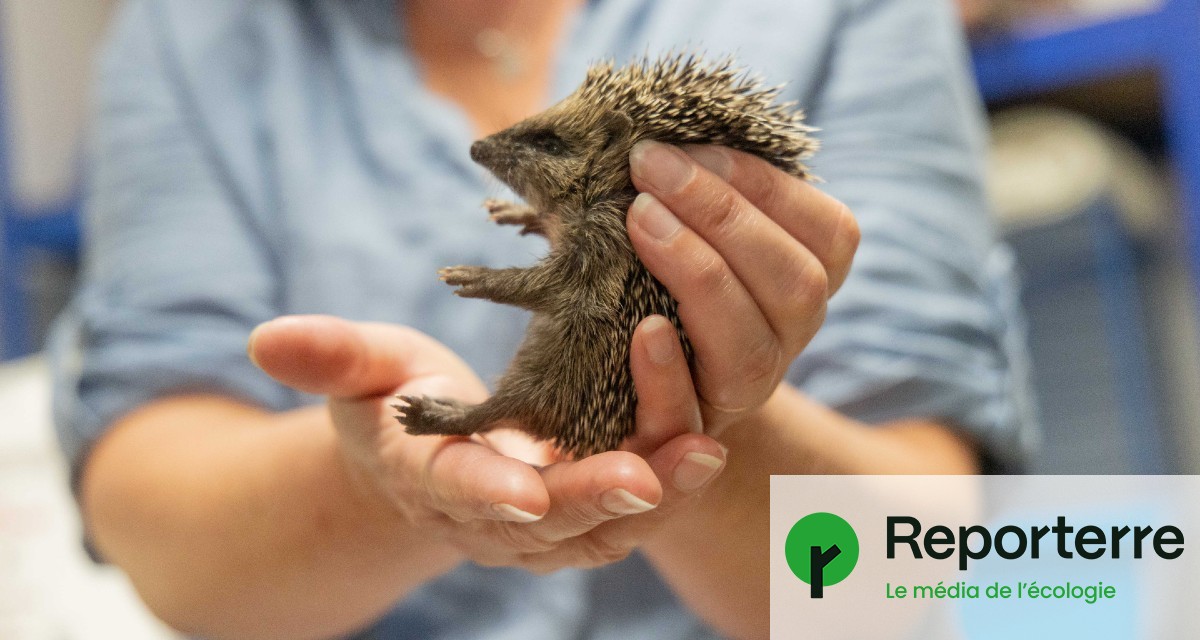 The hedgehog’s baby is called the choupisson. Such cuteness, little known to the general public, alone deserved a report. Head to the south of Paris, in the city of Orsay (Essonne), to meet Sara Stahl, a lover of the species who opened her care center called Les P’tits Kipik in 2018. Her charges are settled in a pretty hut at the bottom of his garden, at the end of a flowery path of rock roses and enormous poppy flowers.

Inside, six cages, a sink and shelves overflowing with veterinary products. We arrive right at the time of breastfeeding. Sara Stahl gently picks up a choupisson that someone brought her the day before. The little one greedily sucks the syringe of a high-protein milk. Hungry, he had probably not eaten for several days, before arriving in the center.

The little one in the middle of a breastfeeding session. © Mathieu Genon/Reporterre

“ People called me because they couldn’t deal with it. It is normal, at this age it is not enough to put down a bowl of milk for kittens. You also have to help him with his needs. » She gently pats the animal’s lower abdomen. A small turd comes out. She then cleans his chops to avoid skin irritation. “ In nature, it is the mother who licks and helps him to do all this. »

Caring for a Specimen of the Species Erinaceus europaeus don’t improvise. Sara Stahl trained for several years at the Maisons-Alfort veterinary school before obtaining a certificate of competence issued by the Departmental Directorate for the Protection of Populations (DDPP). The selection is tough: you have to put together a fairly strong file, justifying two years of experience, go before a commission made up of veterinarians, researchers and scientists who check the state of knowledge. All to get the famous sesame: the prefectural decree allowing to open its own center.

An obstacle course all the longer since Sara Stahl also works at 65 % as a coordinator in a popular education movement. But this training is essential to fully understand the species and treat it as well as possible. “ A wild animal will hide its symptoms until the last moment, otherwise in the wild it gets eaten. It is therefore necessary to be able to detect the slightest signs of illness, otherwise it is finished: he can die in 48 hours. I learn something every day, even after ten years of experience. » His dedication is paying off. Last year she collected 250 hedgehogs and released 80 % in nature.

Sarah Stahl and her husband Jérôme Gripon, who helps her take care of her quilled residents. © Mathieu Genon/Reporterre

A higher rate than multi-species centers, such as that of Maisons-Alfort. “ Over there, there are too many volunteers who cannot know all the species. And when it’s not the same person who takes care of the animal all the time, the stress increases », explains the healer. She managed for a long time alone with the help of her husband, Jérôme Gripon. But since this year, two volunteers in training at the veterinary school come to give him a hand. Something to relieve her and allow her to sometimes go on vacation in peace.

Once cared for, the hedgehogs spend some time in an outdoor enclosure to reaccustom themselves to the wild life before being released. © Mathieu Genon/Reporterre

At the moment, Sara Stahl takes care of about twenty boarders. Well pampered proteges settled in large cages, lined with newspaper and covered with a small towel to avoid the bright neon lights. Inside, one of the boarders is snoring loudly. This is Dominica, a hedgehog suffering from a lungworm preventing her from breathing properly. Sara Stahl puts on her gloves, picks her up. The hedgehog curls up. “ I wake you up sweetheart, I’m sorry. » She installs it in a waterproof box for her nebulization session. A cloud of fine molecules of vapor whose inhalation will penetrate deep into his bronchi. She then weighs the animal, which regains some weight and appears to be on the mend.

Good news, because the drugs are straining his budget. Fortunately, today, donations from the 250 members of the Les P’tits Kipik association cover all material and veterinary costs.

This also enabled it to finance the opening of branches in Saint-Maur-des-Fossés, Les Ulis and Chevreuse, in Île-de-France. Another was to open in Dourdan in July and probably in Rueil-Malmaison, if the authorization file is released one day.

If all goes well, this chick will be released into the wild when it weighs about 300 grams. © Mathieu Genon/Reporterre

Enough to satisfy a growing demand: there are between 30 and 40 centers in France. A number that is quite insufficient to meet the needs. “ We are at a time when many people are gardening and contacting us because they find hedgehogs in the grass. » Calls come from all regions, because Les P’tits Kipik is one of the few centers to be reachable by phone. His website also lists a series of recommendations for caring for an injured hedgehog. Unfortunately, Sara Stahl sometimes has no solution for helpless individuals. “ In Creuse, the first center is sometimes 200 kilometers away. If people can’t move, I can’t do anything. »

The threats to hedgehogs are multiple. And lawnmower blades or car wheels are far from the deadliest. The animal flees the countryside which has now become hostile. The hedges, where he finds refuge, are uprooted by the consolidation. The fields, where it feeds, are stuffed with pesticides. The increasingly mild winters disrupt its hibernation process. The summers, too hot and dry, make it thirsty and hungry with soil that is too hard to scratch to find insects. The hedgehog then falls back on carrion, slugs or snails carrying lungworms that infest it.

The premises of the P’tits Kipik center in Orsay, at the end of Sara Stahl’s garden. © Mathieu Genon/Reporterre

“ All the centers will say that they are getting more and more hedgehogs. Look at the statistics in England, where they face extinction, and in Belgium. There’s no reason it should be any different with us », remarks Sara Stahl. In France, the species is protected, but it is not classified as threatened on the red list of the national inventory of natural heritage, for lack of available data. To make up for this lack, the League for the Protection of Birds (LPO) launched a census mission, the results of which will be known within a few years.

Harrisson, the hedgehog who is finishing his recovery in the center and who will soon be released. © Mathieu Genon/Reporterre

In the meantime, the healer continues her work. In a few days, she will release Harrisson, a plump hedgehog who has been recovering for a month. Not without heartbreak. “ The hardest part is when babies are brought to us before fall and then hibernate with us all winter. Not easy to let them go in the spring. But at the same time it’s gratifying, like when you’re proud of your children when they leave the family nest. »

Sara Stahl has never kept a single one of her proteges. “ The hedgehog is a prehistoric primitive animal. It hasn’t changed since the days of the saber-toothed tigers. It does not impregnate humans. » Without authorization, it is also forbidden to hold them, under penalty of a fine and imprisonment. The species is not domesticable and to be convinced of this, just look at Harrisson, taken out of his cage to take some pictures. Barely paws on the ground, the animal takes off at full speed to hide in a thicket, far, far from the humans who treated it.

Subscribe in less than a minute to receive a selection of articles published by Reporterre.