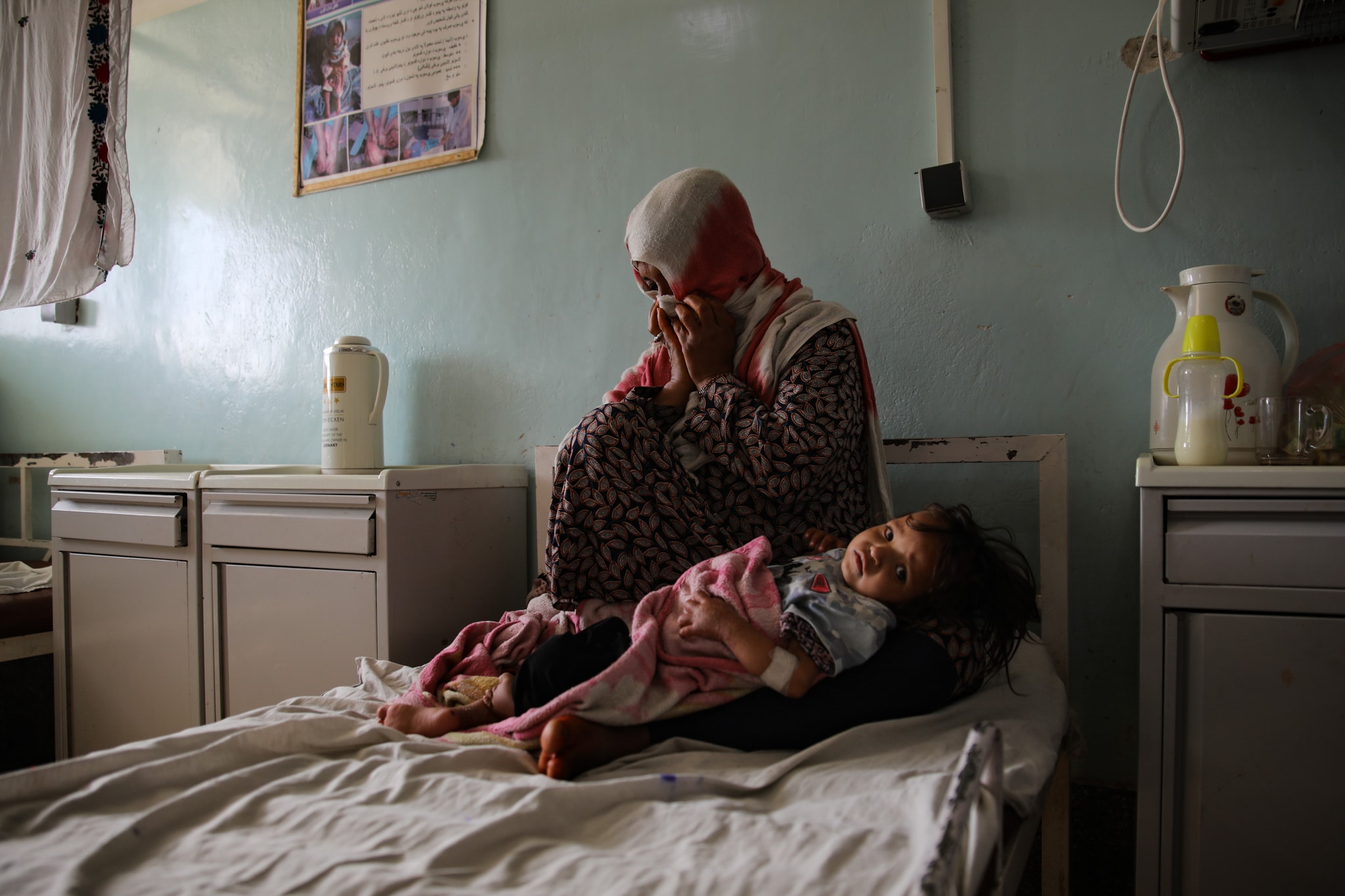 Since the Taliban took power in August 2021 and the ensuing economic crisis, the hospital sector has been in agony. Only certain structures survive thanks to international aid, but they must adapt their functioning to the Taliban ideology. Report in Kabul and Kandahar.

This article was published in n°44 of ActuSoins Magazine (March-April-May 2022). It is now freely available.

A woman and her baby in the malnourished children’s ward at Mirwais Hospital in Kandahar. © Florient Zwein/Hans Lucas.

In the corridors of Mirwais Hospital in Kandahar, families are sitting on a dilapidated floor, for lack of chairs available. On the second floor, there are women in burqas carrying puny babies: “ it is the service dedicated to child malnutrition” says Dr. Ahmad Ullah Fayzy, who works as a doctor.

Shared rooms are overcrowded. Several women and their children are lying on blankets on the ground.

“In total, we welcome 42 patients for only 30 beds. Four times more than last year at the same period”, he adds. On a bed, Fatemah gently rocks her baby, “He is five months old and weighs 2.5 kg”, she said lifting her sweater.

Little Abdul’s ribs stand out on his chest and his belly is swollen, a sign of severe malnutrition. His cheeks are sunken and his legs are skeletal. “I am fifteen years old, this is my first child. I don’t give milk.” indicates the mother.

Dr. Ahmad Ullah Fayzy grabs the baby’s chart and explains: “When mothers don’t feed enough, they stop producing milk. » According to the doctor, “Many Afghans were already suffering from malnutrition in remote areas. But since last August, because of the economic crisis, the cases have exploded. Even in big cities. »

More than 60% of Afghans live in food insecurity, according to the World Food Programme.

A young baby in the malnourished children’s ward at Mirwais Hospital in Kandahar. © Florient Zwein/Hans Lucas.

Due to the international sanctions imposed after the Taliban took power, the World Bank stopped financing the hospital sector, which is now at risk of collapse.

In Afghanistan, thousands of public institutions no longer receiving international aid have been unable to purchase medical supplies and pay salaries since last August.

According to the Director General of the World Health Organization (WHO), Tedros Adhanom Ghebreyesus, international budget cuts have forced health care workers to decide who to save and who to let die. »

If structures such as the Mirwais hospital are still functional, it is not only thanks to many employees who continue to go to work without pay, but also thanks to the maintenance of certain international aid: “the International Committee of the Red Cross supports us, says Dr Mohammad Sadik, a pediatrician at Mirwais Hospital. Without it, we could not function normally. »

In the heights of Kabul, southwest of the Afghan capital, yellow ocher buildings are surrounded by colorful flowers. A peaceful calm reigns, which contrasts with the dynamism of the city center. Outside the entrance, heavily armed Taliban guards. They are now in charge of the security of the country.

Behind these ultra-protected walls are the premises of the NGO La Chaîne de l’Espoir, an organization founded in France in 1994 and established in Afghanistan since 2006. Inside, we find Saïd Rahim Raskar, dressed in a suit traditional afghan. The man has been head of mission for the NGO since July 2021.

Five-month-old Ali suffers from severe malnutrition. Hospitalized for two days at Mirwais Hospital in Kandahar, he weighs 3.5 kilos. Her mother comes from a poor family and she is only fifteen years old. For lack of resources, she does not eat enough and does not give milk. © Florient Zwein/Hans Lucas.

“We mainly intervene in care and surgery for the poorest populations, and organize training for local healthcare staff”, says Mr. Rahim Raskar. After the return of the Taliban, several employees of the NGO left the country: “about six people. But they have been replaced. »

The project manager enters a living room covered in Afghan-style rugs. A few patients are seated on burgundy cushions on the floor.

One of them, Bayazid Ahmad, accompanies his son, Shukrallah, victim of an accident in the genital area: “I have not found any other medical center capable of performing the reconstructive surgery “says the father. According to Said Rahim Raskar, “some operations cannot be carried out in the provinces” due to lack of equipment and lack of staff training.

At the Chaîne de l’Espoir, in addition to medical expertise, care is free and patients are housed and fed during the medical follow-up. Since August 15, because of the crisis, the population has been impoverished. Demand therefore exploded. “By October, we had performed 80 surgeries. 150 in November » says Mr Rahim Raskar. France is the main donor of the organization, up to one million euros per year.

Despite the political upheavals, aid continues to be paid, “but the needs have increased and our budget will double for next year “, he adds.

The French Mother and Child Hospital: an exception

An Afghan doctor monitors a small patient in the cardiology department at the French Mother and Child Hospital in Kabul. © Florient Zwein/Hans Lucas.

The Chain of Hope assists patients with heart surgery, plastic surgery – an essential field in a country with many war casualties – burns and eye operations, among others, as evidenced by Jamila’s two sons , who suffer from gaze deviations: “my husband is unemployed, we couldn’t pay for the operation. »

A few meters away stands the French Mother and Child Hospital in Kabul. On the facade of the building, a huge fresco represents a veiled woman and her child, symbol of the institution.

The hospital operates partly with private capital, and does not depend on the Afghan state, which enabled it to cope with the arrival of the Taliban last August.

The places are modern, “they contrast with the state of the medical sector in the rest of the country”, says Dr. Anush Ahmad, an intern specializing in cardiac surgery. This is where surgeries are performed for patients cared for by La Chaîne de l’Espoir. “We are operating normally, says the insider, but since August 15, French surgeons have not come to the country because of the political situation. However, they are the only ones who can perform certain complex surgeries. It is very problematic. »

The rules of the Islamic Emirate

A woman wearing traditional garb and burqa with her child in the treatment ward for malnourished children at Mirwais Hospital in Kandahar. © Florient Zwein/Hans Lucas.

In the corridors of the hospital, Gulpari Nazari goes from one room to another to check the state of health of the patients. Head of nurses in the cardiology department, she looks forward to continuing to work: “On August 15, we women were afraid of having to stay at home. But at the hospital, we were able to keep our jobs. »

Many women had to stop working after the fall of Kabul. But in the medical sector, they are largely spared because “Our presence is essential because of the lack of resources. We have to follow strict rules of dress with the wearing of the veil and loose clothes, but nothing has really changed in the hospital”, she assures. She still wants to leave the country: “The situation is deteriorating, the future is uncertain. It is difficult for me to live in these conditions. »

The hospital was spared the new non-mixing rules imposed by the Taliban, but this is not the case for La Chaîne de l’Espoir. In an office of the NGO, Saïd Rahim Raskar points to a recently installed artificial wall: “it aims to separate men and women”he said, looking resigned. “Women and men cannot use the same doors or sit together. We also had to recruit staff. It’s a bit complicated logistically, but we do our best to respect the rules. »

New facilities that have a cost: about 30,000 Afghanis for the separation walls, or nearly 300 euros.

The return of the Taliban ended the war. But the violence has not gone away. In the hospital sector in particular, the fear of terrorist attacks by the Islamic State in Khorassan is on everyone’s mind. Last November, the organization claimed responsibility for an attack in the Kabul military hospital and is suspected of having attacked a Médecins Sans Frontières (MSF) maternity hospital in June 2020.

The French hospital in Kabul and La Chaîne de l’Espoir can also be targets for the terrorist organization: ” I’m afraid. I think about it everydaylaments cardiologist Anush Ahmad, but we must continue our work to treat the Afghans. »