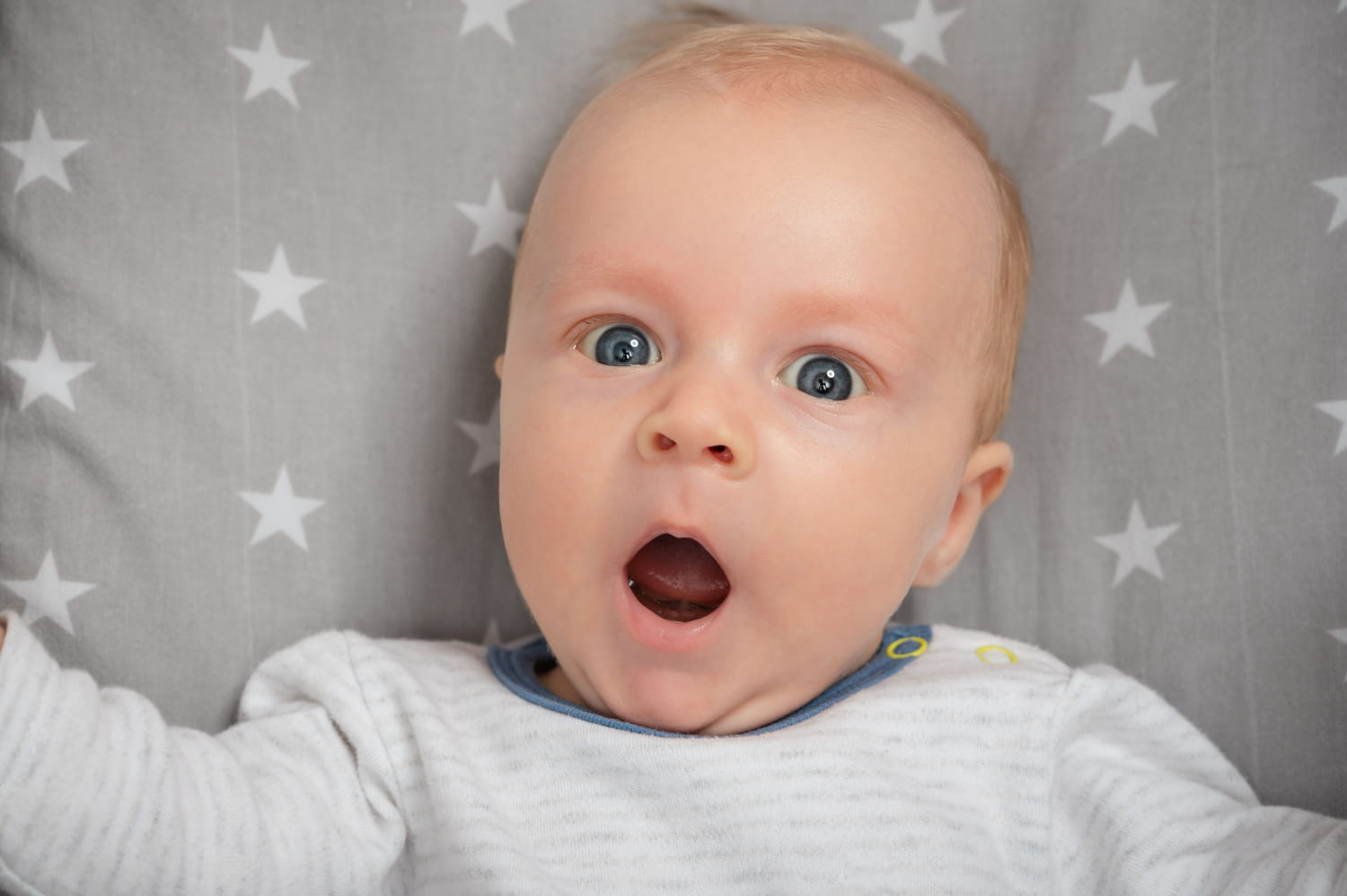 Hiccups are a mild, very common symptom in babies. Just after feeding, he may have a more or less long hiccup attack. What is the cause and how to stop this hiccup? Answers from Doctor Noémie Nathan, pediatrician.

Your baby has just swallowed his bottle and there he is, launched into a big hiccup attack. In adults, all the means are good to pass the hiccups: hold your breath, drink a glass of water with a spoon in it, eat a sugar soaked in vinegar, ask a friend to scare you. So many methods that are ultimately ineffective and above all very difficult to apply with a newborn!

What causes hiccups in babies?

“Hiccups are due to a spastic and coordinated involuntary contraction of all inspiratory muscles (diaphragm and intercostal muscles) associated with closure of the glottis. It results in repetitive and sometimes noisy shaking” explains Doctor Noémie Nathan. “It is above all an uncontrollable respiratory reflex which leads to a succession of characteristic sound hiccups“, continues the pediatrician. A perfectly banal and harmless phenomenon … which has no particular utility. The famous saying of our grandmothers “Hiccuping baby, healthy baby!” is not based on any reality A hiccup is not a sign of good health, nor is it a sign that your baby is growing well, another common theory. keep an eye out if baby seems uncomfortable or if the hiccups cause pain. It’s important to make sure her hiccups are not a sign of GERD internal (gastroesophageal reflux disease).

A banal phenomenon, without gravity, and not painful

Why do babies often hiccup?

In the baby,hiccups are triggered by an enlarged stomach after eating too much or too quickly, combined with a change of position, which compresses the diaphragm and triggers the hiccups“says the pediatrician. But it can also occur for no particular reason when baby has an empty stomach. This is particularly the case when it is overstimulated. When fussing, he can swallow air and trigger a hiccup attack.

Up to what age can a baby have hiccups?

up to a year, baby can frequently have attacks of hiccups, which can last from a few minutes to half an hour.

Baby has hiccups when lying down, why?

It is no coincidence that baby’s hiccups are frequently triggered when lying down. As Doctor Nathan explains “the occurrence of hiccups is triggered by lying down because the volume of the dilated stomach mechanically compresses the diaphragm which triggers the spasm“The pediatrician nevertheless wants to be reassuring,”hiccups being completely harmless and painless for the child“Going to bed while having a hiccup is absolutely safe.

Baby can get hiccups regardless of how they feed, breast or bottle. However, bottle-fed babies are subject to it a little more frequently because they can swallowing air due to the pacifier. But in general, the occurrence of hiccups depends mainly on the meal speed and volume ingested.

Does the fetus have hiccups?

All mothers have experienced this funny feeling, when baby begins to hiccup in utero. The explanation is very simple. In her mother’s womb, the fetus regularly swallows amniotic fluid, nothing extraordinary therefore that he may have hiccups, as will be the case later with a bottle of milk. We observe this phenomenon from the 20th week of pregnancy and they are very noticeable by the future mother who makes a good distinction between the baby’s movements and her hiccups!

First thing, of course, we avoid all the grandmother’s methods reserved for adults! “To make the hiccups pass faster, you have to empty the stomach to decompress the diaphragm“ explains Doctor Nathan. For that it is necessary breastfeed the baby because swallowing causes the stomach to open and empty. We can either offer him the pacifier or the little finger, but also offer him a small bottle of water. Also feel free to rock him gently and pat his back to help get the air out.

Immediately after the meal, it is recommended to keep baby in an upright position for about twenty minutes. It is better not to lengthen it immediately afterwards, which could promote reflux and the appearance of hiccups. Indeed, lying on your back, the full stomach puts pressure on the diaphragm, thus causing small jolts.

IF baby already has hiccups

Carry baby on your forearm, so that his belly is pressed on it.

When to worry about a baby with hiccups?

Don’t worry if you can’t stop baby hiccups, it will pass by itself after a few minutes and rarely exceeds more than half an hour. You will also see that very often, the hiccups do not seem to bother him at all and that he continues to lead his little life without worrying about it in the least in the world.

Thanks to Doctor Noémie Nathan, pediatrician.