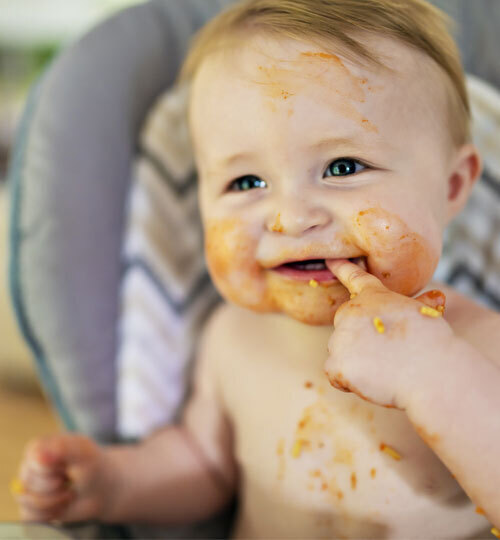 Although exclusive breastfeeding is recommended by the WHO for 6 months, in practice, in developed countries, a minority of infants are exclusively breastfed up to 6 months. L’European Society for Paediatric Gastroenterology, Hepatology and Nutrition (ESPGHAN) and theEuropean Food Safety Authority (EFSA) recommend starting food diversification between 4 and 6 months. Before 3-4 months, the infant’s psychomotor development does not yet allow him to eat solid foods safely (risk of choking, hypersensitivity of the oral sphere, then potential food refusals). Conversely, if diversification is postponed, the development of mastication may be delayed, favoring the appearance of food orality disorders.

Contrary to what was recommended in the 2000s, it is no longer advisable to delay the introduction of foods with high allergenic potential. The LEAP study (Early Learning About Peanut Allergy), in 2015 (introduction between 4 and 11 months or elimination of peanuts in infants with eczema and/or egg allergy), and the EAT study (Inquiring About Tolerance), in 2019 (introduction from 3 months or at 6 months of peanut, cooked egg, milk, sesame, fish and wheat in exclusively breastfed infants), clearly demonstrated that the early introduction of these allergens, between 4 and 6 months, reduces the risk of food allergy in children, especially in the case of atopic terrain.

> Adapt the texture of food to the child’s psychomotor development and masticatory abilities. Chewing is independent of dentition. The smooth and creamy purées, introduced between 4 and 6 monthsdo not require any particular masticatory force. Granular purées are offered around 7-10 months (basic up-down chewing), then the soft textures (banana, avocado, etc.) around 10-12 months (intermediate chewing). Foods that are hard but soluble and melt in the mouth (shortbread, etc.) can be given around 10-12 months. Hard foods are offered gradually, after 10-12 months, as they require well-developed and rotary chewing. Fibrous foods (red meat, pineapple, etc.) and sticky foods (soft caramel, etc.) are generally accepted after 3 years.

The lipid requirements of infants are higher than those of older children, especially for their brain development. The addition of fat must be systematic, including in small industrial pots (butter, fresh cream, melted cheese, oil). Essential and semi-essential fatty acid requirements (linoleic, alpha-linolenic, docosahexaenoic acid [DHA]) are most often covered by infant formula. However, the enrichment of growing-up milks with DHA is not mandatory: after 1 year, consumption of 2 portions of fish/week allows to cover the needs (table to be consulted on this link).

Iron deficiency is the most common nutritional deficiency in the world, including in developed countries. Given the highly variable absorption coefficients of iron (30% for heme iron from meat and fish, 5 to 10% for non-heme iron from legumes, plants and iron-enriched cereals), the Société française de paediatrics recommends assessing intake, not of ingested iron, but of absorbed iron. These needs are very low during the first 6 months of life and then increase. Between 6 and 12 months (1 mg/d), they are covered by 700 mL of milk 2e age, or less depending on the child’s meat consumption.

In case of exclusive or majority breastfeeding (women’s milk is low in iron), supplementation must be systematic in infants over 6 months (table to be consulted on this link).

How to proceed in practice?

Between 4 months and 1 year, the infant gradually goes from 5 to 6 bottles to 4 meals a day.

Diversification usually starts with vegetables and fruits. Purees are prepared by mixing vegetables with as many potatoes or starchy foods (half and half), steamed or boiled, with little or no salt. The fruits are generally given first in cooked form, stewed, but can be raw, mashed. If the infant refuses purées with a spoon, they can be mixed with the milk from his bottle so that he gradually accepts the taste.

Gluten can be introduced in the form of cereals in baby bottles from 4 months. However, it is advisable to limit the quantity at the beginning of diversification.

Introduce meat and fish between 4 and 6 months. We start with 10 g of mixed food, i.e. 2 teaspoons per day, then we gradually increase their quantity up to 30 g/d at 1 year. The egg must first be introduced in cooked form (boiled or cooked egg), then less and less cooked: about half an egg twice a week.

Introducing peanuts between 4 and 6 months reduces the risk of peanut allergy, especially in countries where this allergy is frequent and in the event of atopic terrain at risk. It is recommended to give the equivalent of 2 g of peanut butter protein per week, or 1 heaped teaspoon. The other nuts can also be introduced early, in the form of a spread (almond, hazelnut) or powder.

Several new foods can be introduced on the same daybut it is necessary to avoid associating several foods with high allergenic potential (eggs, fish, peanuts, nuts), in order to be able to identify the food responsible in the event of an allergic reaction.

The environment during meals is very important. The infant must be installed in a restrained position, in the arms, or in a suitable high chair. Parents must be encouraged to feed their child in an environment calm, undistracted. It is also important that the infant sees his parents or other children eat so that he is confident with the foods offered. The spoon should fit and not hurt him. Parents may be required to offer a new flavor 8 to 10 times before the child accepts it, but you have to avoid everything forcing eating.

Warning: some foods are not recommended during infancy

Unpasteurized cheeses are strongly discouraged before the age of 10, as well as raw or undercooked meats (cook ground meat thoroughly) to prevent the risk of haemolytic uraemic syndrome. Raw seafood products are not recommended before 5 years. Honey (mainly of artisanal origin) is not recommended before the age of 1 year (risk of botulism). Vegetable juices (rice, almond, etc.) are drinks, but should not replace milk (mother or infant). Finally, conventional cow’s milk is not nutritionally suitable for infants under 1 year of age.

What about child-led diversification?

This method allows the baby, from the age of 5 to 7 months, to take solid foods into his own hands. It has several advantages: early development of masticatory abilities, discovery of tastes individually, reduction of the risk of food neophobia. It is indeed very important to let children touch and play with food that they will put in their mouths, so that they play an active and autonomous role in their diet. However, the DME has its limits: it promotes false routes, requires more careful monitoring, and exposes to the (debated) risk of nutritional deficiencies (lipids, iron, zinc, vitamin B12).

Food diversification: everything (or almost) from 4 months.Rev Prat (online) September 19, 2021.