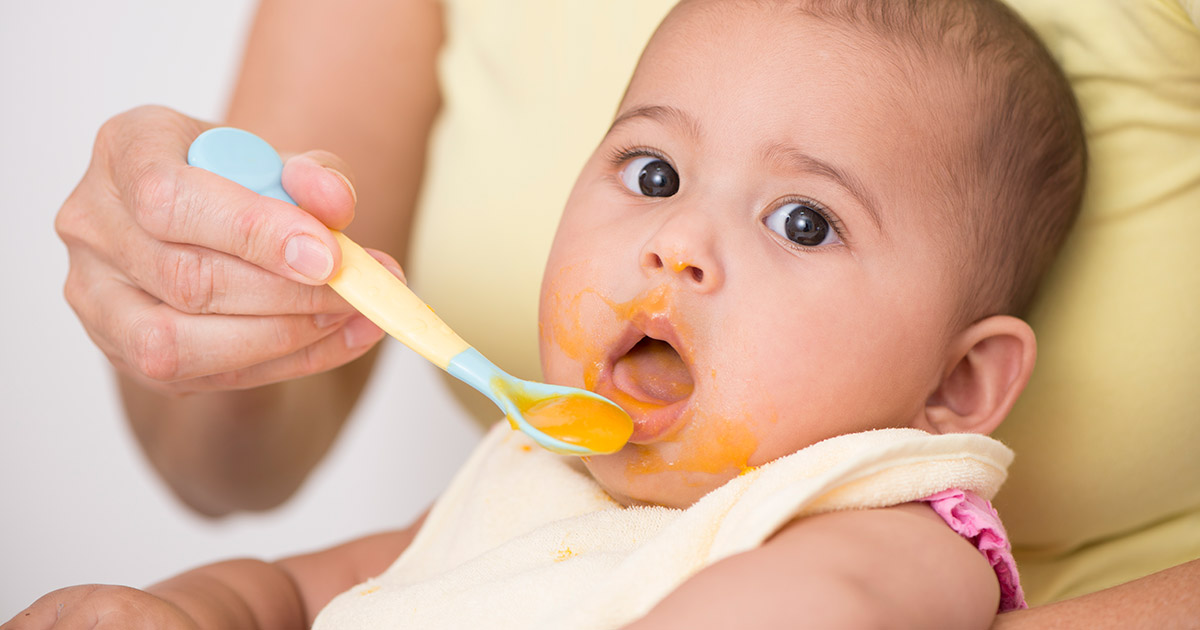 As a parent, we tend to worry when the introduction of complementary foods does not go as we imagined. Here are some situations that may concern you… and something to reassure you, I hope.

The first times baby eats purees, it’s normal for there to be more on his chin than in his stomach! After 6 months (or so) of only drinking, he must tame complementary foods. In contact with the first purées or the first food in pieces, it is legitimate for babies to ask themselves: “What is that? and “What do I do with this?” »

First there is a question of skill. Foods, even purees, are not swallowed as easily as milk. Baby must learn to chew and use his tongue to move food in his mouth. The first tests are not conclusive. For no baby. Be reassured.

Then there is the issue of flavours. If he is breastfed, he has always had milk whose flavor varies according to his mother’s diet. But the introduction of complementary foods offers him direct and more intense contact with the new flavors. The gap is even greater with a formula-fed baby who is accustomed to only one flavor. With food, a whole world opens up to him. It is normal for him to like certain flavors instantly, such as sweet fruits, but that he needs more tries for certain vegetables, in particular. In any case, you should know that your baby is developing both his tastes and his skills. None of this is instantaneous.

If your baby is completely unable to swallow food, even after several weeks, it is of course recommended to talk to his doctor. The intervention of an occupational therapist may be necessary. It is the specialist who helps, among other things, to treat swallowing problems.

It’s one thing if your baby spits up, it’s another if he vomits. There can be several causes. In some babies, vomiting is due to an immaturity of their digestive system. This happens more often in toddler babies. At 6 months, the age when he should start solid foods, this cause is less common.

Vomiting can also be a symptom of food allergy. If your baby vomits while eating one or more specific foods, talk to your doctor about it. to test and verify.

Babies sometimes vomit food that they are forced to eat, for example if you force him to eat a food he doesn’t like, or if you force him to eat more than he needs. It should ring a little bell and remind you that you don’t have to insist that your child eat. Give him time to develop his tastes and learn new foods. And trust his natural ability to eat the amount of food that meets his needs.

If your baby gags while eating, it’s because his body has the right reflex that protects him from choking. The gag reflex ( in English) occurs when food moves a little too far on his tongue allowing it to come back forward. Since baby still lacks coordination and control in his mouth, this reflex is particularly acute. It is observed in babies, whether they are fed purees or according to the principles of independent infant feeding (baby led weaning). If the gag reflex occurs constantly, it is a good idea to talk to the doctor about it in order to check the possible causes.

Wondering if your child is eating enough? You want so much that nothing is missing! Your baby is able to manage the amount of food he eats. Remember: you didn’t worry when he was drinking from the breast. Why? You knew he asked for a drink when he was hungry and stopped drinking when he was full. So tell yourself one thing: nothing has changed.

You have already heard: “a baby does not allow itself to be starved to death”. Well, that’s generally true. A healthy baby eats varying amounts from day to day. Sometimes a lot, sometimes a little. It’s normal. If a baby systematically refuses to eat, the cause must be found: does he have pain (gastric reflux, for example)? Is it uncomfortable? The help of a nutritionist specializing in childhood is very useful at this stage.

Some babies refuse the spoon and purees even after several days of trying. What do we do then? Certainly, don’t force it. You can then offer him something other than purees. Your baby may prefer to pick up food on her own with her little hands, and she prefers chunks to purees. No problem! Infant self-feeding may be a more suitable method. Here are some examples of foods you can offer him:

From 6 months, babies learn to use their hands and carry food – and many other objects! – to his mouth. Around the age of 9 to 12 months, he will learn to handle the spoon, but until then, nothing prevents you from letting him develop his autonomy a little by letting him eat alone and helping him if necessary.

When you become a parent, you ask yourself a thousand and one new questions. And we can have a thousand and one new concerns. Don’t hesitate to talk about it to be reassured. It’s possible that what’s bothering you requires intervention (if the problems persist or your baby’s growth stalls, for example), but often the best solution will be to let go. “! “. It’s not just the title of a song!