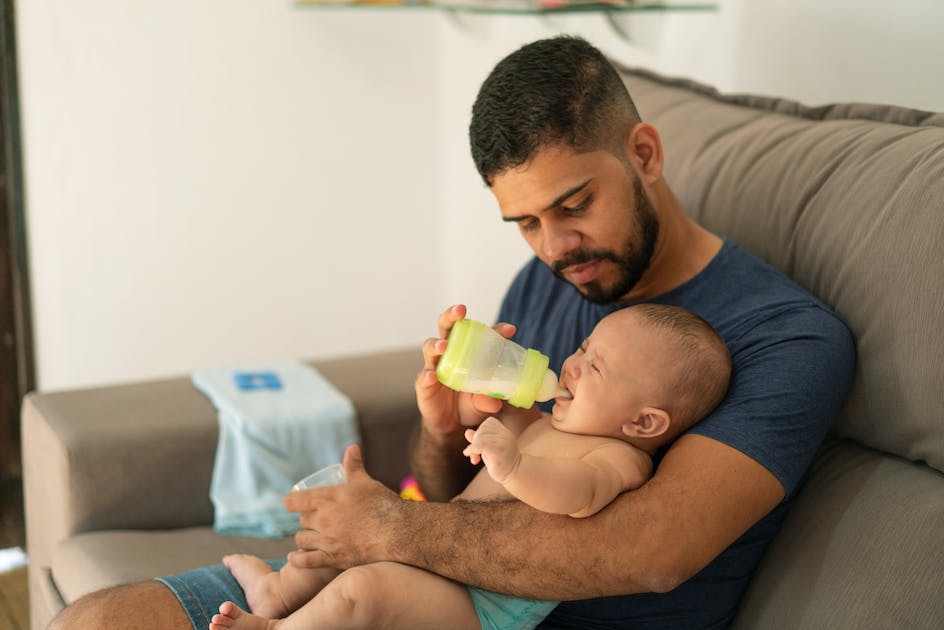 Esophagitis means inflammation of the lining of the esophagus, this conduit which goes from the mouth to the stomach.

” The exact definition of esophagitis is histological, but, by extension, this term is used when there is a strong clinical suspicion. “, explains Dr Mélanie Rapp, pediatric gastroenterologist in Lyon. Histology refers to the structure of tissues, in this case, the condition of the lining of the esophagus.

” We should only speak of esophagitis when an endoscopy has been performed, this invasive examination is however not practiced systematically in toddlers. “, explains the specialist. It exists different causes which may explain the occurrence of esophagitis in the baby, the main one being the gastroesophageal reflux pathological.

This is the major cause of esophagitis in infants: acid reflux attacks the lining of the esophagus, causing inflammation. Peptic esophagitis occurs when acid reflux occurs several times a day and is not managed, whether by the application of anti-reflux measures or specific medications.

Esophagitis can result from a serious household accident, such as ingestion of a caustic product that degrades or even destroys living tissue, for example a household product such as bleach. Likewise, ingestion of a hot productlike infant milk in a bottle whose temperature has not been checked beforehand, can cause so-called thermal esophagitis, due to heat.

In cases of caustic product ingestion, the child must of course be examined urgentlyand the doctor will most likely request that an endoscopic examination be performed to determine the extent of the lesions and agree treatment accordingly.

A cow’s milk protein allergy (APLV) can also be involved in the occurrence of esophagitis in infants. A particular form is theeosinophilic esophagitis, named after cells involved in the immune process. This esophagitis is characterized by an inflammatory reaction due to an allergen. CMPA is most common in infants and will require a specific elimination diet to treat this esophagitis. CMPA can also be responsible for pathological reflux for which the usual drug treatments are ineffective.

It also exists esophagitis of infectious origin (related to herpes or cytomegalovirus in particular), but these rarely concern toddlers.

What are the signs and symptoms of esophagitis in infants?

The major symptom, which most often leads pediatricians to strongly suspect esophagitis, is the presence of blood (even in the form of traces) in the baby’s regurgitation. But crying after meals or refusing to eat leading to significant weight loss can also be indirect signs of inflammation of the esophagus.

In the case of esophagitis due to gastroesophageal reflux, the symptoms are the consequence of acid reflux creating inflammation in the esophageal mucosa.

A consequence of gastric reflux, or GERD?

Reflux most often remains benign and without associated esophagitis. Diagnosed and treated in time, pathological GERD (see next paragraph) will not necessarily lead to esophagitis. Physiological reflux is reduced, or even disappeared, with simple, non-drug measures. Growth and diversification are important steps towards improvement.

It should be noted that some children may have a greater risk of developing esophagitis, due to particular pathologies, such as abnormalities of the esophagus or the digestive system (such as hiatal hernia), chronic pulmonary problems (cystic fibrosis in particular) or psychomotor developmental disorders.

How to know if baby has pathological reflux?

In infants, GERD is considered pathological when it causes complications: when histological esophagitis is diagnosed, but also when it is associated with a break in the weight curveof the baby, and/or that it causes sleep disturbances, breathing problems, loss of appetite, even refusal to feed, crying without further explanation, traces of blood in the regurgitations…

The baby cannot explain his discomfort due to acid reflux, it is often difficult to know if it is a physiological GERD, without complications, or if we are in the presence of a pathological GERD requiring treatment. specific drug. Sometimes lifestyle and dietary measures are enoughwhile waiting for things to get back to normal with, in particular, the sitting position and the acquisition of walking.

At what age does the baby flapper close?

In infants, post-meal regurgitation is most often benign and results from immaturity of the digestive system, but also of the distension related to the daily quantity of milk.

The gastroesophageal or cardia junction area is sometimes immature, and can cause reflux. Most of the time, physiological reflux gradually decreases from the child’s 4 months during diversification, to disappear completely around 12 months, when the child moves into a vertical position (sitting then standing with support). ” There is no specific age, it will depend on the children “, underlines the gastropediatrician.

Esophagitis in babies: diagnosis and management

Diagnosis of esophagitis in a baby is largely based on history and observation of symptoms.

If the pediatrician suspects esophagitis, and in certain specific situations, he or she may order a endoscopy (or fibroscopy) to directly observe the esophagus using a small camera. However, it is an invasive procedure whose benefit-risk balance must be well assessed upstream. Endoscopy is performed under general anesthesia. It makes it possible to make the diagnosis of esophagitis with certainty, but also toassess its degree of seriousness.

Samples can also be taken for analysis. According to Dr Rapp, this test is not usually not undertaken routinely in infants“ unless major indication, i.e. bloody vomiting “.

If the esophagitis is likely the result of pathological GERD, a pH-metry can also be performed, using a probe placed in the stomach for 24 hours, with the aim of define reflux acidity and refine the treatment.

The main treatment for esophagitis, of course, depends on the cause of this pathology. Most often, it is a drug treatment, which consists of the prescription of a proton pump inhibitor drug. The molecule binds to this pump, which is then destroyed, which decreases the production of acid in the stomach. The best known treatment is Inexium, massively prescribed in the context of pathological GERD in infants, which makes it possible to treat the acid side of regurgitation, but not the regurgitation itself. It must be undertaken over a short period of time and always reassessed to see if there is a real improvement.

Medication antacids (alginates such as Gaviscon ® or Polysilane Gel, in particular) can also be prescribed, instead of or in parallel with a proton pump inhibitor, to protect the esophagus by acting as a gastric bandage. They are often prescribed in first intention, before Inexium, which can have undesirable effects.

If GERD is involved in the onset of esophagitis, the placement of lifestyle advice remains the first step before considering treatment: space out meals, thicken infant milk (with anti-regurgitation milk, known as AR, based on starch or carob), start food diversification early, maintain infant in an upright position after feeding or bottle-feeding, etc.