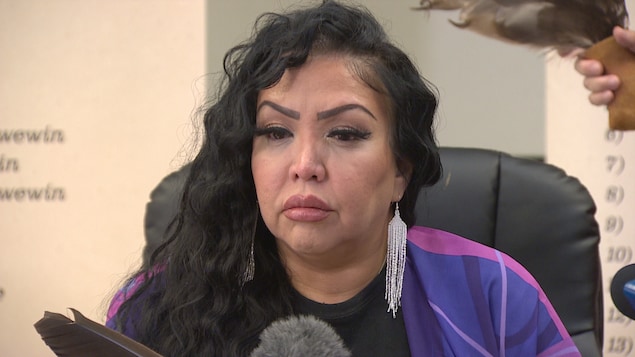 Warning: This story contains details that some readers may find upsetting.

Pearl Gamblerof the Cree First Nation of Bigstonealleges that he was discriminated against by healthcare staff at Misericordia Hospital during his stay in June 2020.

In a statement of defence, the hospital manager, Covenant Healthasserts that Ms. Gambler and her daughter Sakihitowin received compassionate hospital and nursing care throughout their stay in the hospital.

According to the health care provider, Sakihitowin was treated until his death before being cleaned and dressed in accordance with Misericordia Hospital policy in the event of a fetal death.

Covenant Health denies that Mrs. Gambler was refused entry to the birthing unit or received inadequate care during her stay due to race or other discriminatory groundsreads the statement filed on December 20 and obtained by CBC/Radio-Canada.

Pearl Gamblera mother of two, filed a lawsuit application with the Court of King’s Bench in Edmonton in June 2022. This application was later amended in October and Pearl Gambler is now seeking $1.3 million in damages.

According to her originating application, Ms. Gambler arrived at the hospital’s obstetrics unit with her hair in braids and wearing a sweater that read, “Strong. Resilient. Native. She alleges that she was discriminated against upon her arrival when a staff member allegedly told her thatthere [avait] nothing for her here.

This member of the Cree Nation of Bigstone claims to have been left alone for a long time. When she was already giving birth, a nurse would have arrived, but without offering her help despite her requests.

Furthermore, the statement of claim claims that there are medical records proving that the baby was born alive. Mrs Gambler alleges that the newborn baby died from not receiving medical attention. The Cree woman also claims that a nurse asked if she wanted to get her specimen alluding to her dead baby.

None of these allegations have yet been proven in court.

The health facility manager claims that Ms. Gambler was moved to a private single room in anticipation of the risk of fetal death and that she gave birth while receiving nursing care from staff members.

Covenant Health argues that Ms. Gambler was given medication after she failed to deliver her placenta naturally and was taken to the operating room four and a half hours later to have it surgically removed.

The statement said spiritual guidance was provided to the grieving mother and funeral arrangements were discussed.

The hospital manager asks that this lawsuit be dismissed. A doctor is also named as a defendant in the lawsuit, but he has not yet filed a statement of defense.

With information from Julia Wong