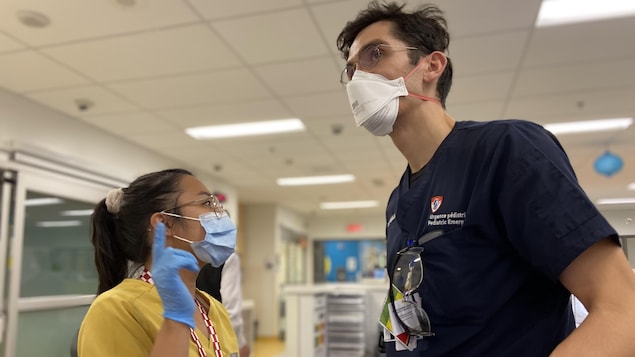 During our visit, about twenty children were on stretchers, while others had been waiting with their parents for several hours in the waiting room.

This morning, things are going well, but a few days ago, we were in crisis, in the heart of the cyclonesays Dr. Esli Osmanlliu, specialist in pediatric emergency medicine.

Make no mistake, however, he warns.

A child in intensive care can mobilize 15 to 20 caregivers, the time to stabilize his condition.

Dr. Osmanlliu distributes the tasks and carefully follows the monitor.

This patient needed critical care with a lot of interventions, a lot of preparation of complex drugs that can be dangerous if not dosed correctly.he will explain to us later.

” It takes hands, it takes brains around this child, the time to stabilize him. »

Critical cases that postpone the stay of less urgent patients by 6 to 12 hours.

As the medical director of the emergency department at the Montreal Children’s Hospital, Dr. Laurie Plotnick, points out, we have more patients and, in addition, the children are sicker than usual.

As Dr. Caroline Quach-Thanh, pediatrician, microbiologist and infectiologist at CHU Sainte-Justine, recently explained to Radio-Canada, all known viruses are circulating concurrentlywhether it is the respiratory syncytial virus (RSV), influenza, parainfluenza, metapneumovirus, the common coronavirus, as well as the famous SARS-CoV-2.

Parents without a family doctor

On several occasions in recent weeks, Caroline Dolan has come with her baby to the emergency room of the Montreal Children’s Hospital.

It’s been a month that it’s been repeated because of pneumonia, she explains. She does not have a family doctor and occasionally manages to get a place in a walk-in clinic. We do not have a choice.

Caroline Dolan often visits the emergency department of the Montreal Children’s Hospital with her baby.

In his case, there was no possible appointment with his family doctor until Tuesday. There is a protocol to follow for the administration of the pump which must be done under the supervision of a doctorshe explains.

According to data from the Ministry of Health, for the past two weeks, the 811 Info-Santé pédiatrique line has received an average of 830 calls per day. The average wait to speak to a nurse is 14 minutes. Nearly a quarter of parents drop the call.

Minister Dubé announced earlier today that the 811 pediatric line in Greater Montreal, which offers a service to help make appointments, would be extended in the coming days to Laval, Montérégie as well as Lanaudière and the Laurentians.

How are the next few months shaping up? We expect to be more overwhelmed than now, that worries us a lotanswers the medical director of the emergency room of the Montreal Children’s Hospital. The ministry is working to help us, adult hospitals are starting to help us, we have strategiessays Dr. Plotnick.

As his colleague Dr. Osmanlliu points out, in pediatric emergencies, it’s a bit like our March 2020when the COVID-19 pandemic was beginning in the adult population.

As a population, we must mobilize, put on the mask in a public environment […] try to see external resources in CLSC, clinic, telemedicinehe advises.