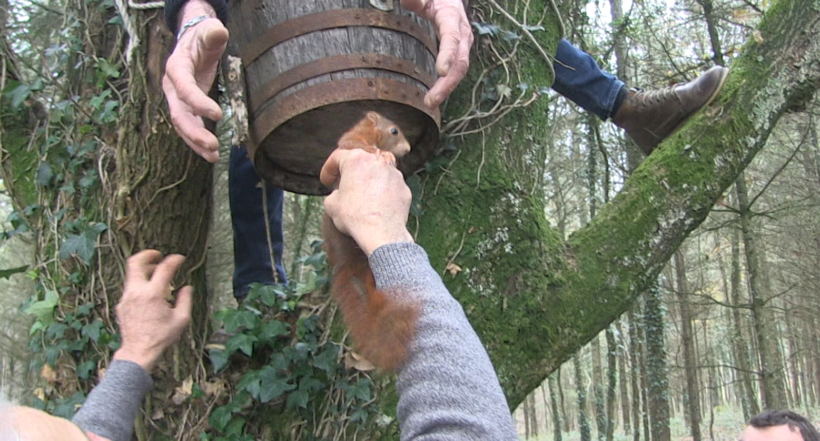 It is a poignant, heartbreaking story. This summer, when the flames devoured the Campénéac forest, an incredible solidarity operation saved a little squirrel from certain death. “We were helping to put out the fire. And suddenly I saw this little squirrel on the trunk. We got him back and the next day, the association came to take him in…”, says Jean-Marc Relinel. This campénéacois was one of the volunteers who participated in the extinction of the tragic fire that ravaged the forest of Brocéliande in August. Thanks to her presence of mind, Clochette, the baby squirrel with burnt paws was able to find her world. This morning he was released. Not alone. During her convalescence, the little female befriended Epuisette, another little victim cared for by the PIAFS association (Protection and Intervention for wild animals) in Languidic. Both were released in the forest of Campénéac in a plot spared by the flames. They have a stock of food and should quickly regain their natural instincts.

The fire that ravaged hundreds of hectares in Campénéac last August is an ecological tragedy that has caused the death of dozens of wild animals… In tears, his voice choked with emotion, Didier Masci, the founder of the PIAFS association recounts the appalling spectacle he discovered a few days after the fire. “For miles, there were corpses of deer, wild boars, reptiles. Some were burned to death, entangled in barbed wire trying to escape”. And he is indignant that no device has been put in place to allow specialized teams to intervene at the same time as the firefighters to come to the aid of wild animals. “It took the intervention of the mayor (note: Hania Renaudie) for me to be authorized to enter the forest. Nothing is planned by the authorities so that we can go and help these animals. We let them die… If we were with the firefighters, or just after the firefighters, we could certainly save some. And there, we have to wait, wait…”, he says.

All may not be lost. Indeed, according to Iréne Aupetit, vice-president of Bretagne Vivante and administrator of the Breton Biodiversity Agency, there is “a real awareness on the part of the Brittany Region of the lack of resources in healthcare centres. The Biodiversity Agency is going to launch a process to work on the organization and the means that will be given to the care centres…”, she explains, acknowledging that this subject of taking wildlife into account is somewhat forgotten by the public authorities. But the acceleration of climatic upheavals that appears through droughts and fires seems to play a revealing effect…

After releasing Clochette and Epuisette, the rescuers found near their car a stuffed squirrel with this little message: “Thank you”!