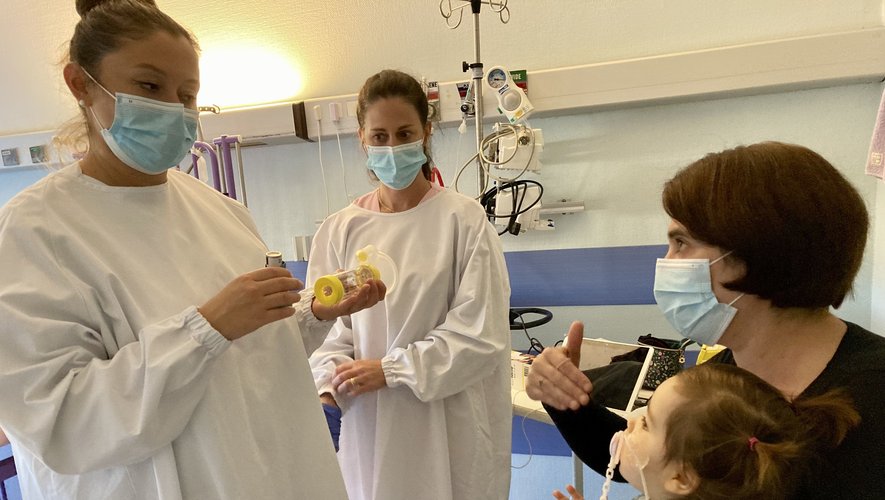 An epidemic unprecedented in its scale and duration: Occitania is not immune to the pressure of bronchiolitis, a disease of the toddler, in a context where an epidemic week follows another epidemic week. In mid-November, during the last report from Public Health France, 373 children under the age of two went to the emergency room of a clinic or hospital in the region for bronchiolitis. 134 children were hospitalized. To this assessment, we must add 62 diagnoses made in liberal medicine, according to data from the SOS Médecins associations of Montpellier, Nîmes, Perpignan and Toulouse. “We can’t see the end of it”, worry doctors, nurses, childcare assistants, at the Montpellier University Hospital, overwhelmed by the influx of babies.

A notebook, an eraser, a pencil, a list of names and surnames of children which lengthens, moves, each one will have to enter the “bed” or the “place” adapted to his state of health: on the fourth floor of the Arnaud-de-Villeneuve children’s hospital of the CHU of Montpellier, Auréline Olivier, health executive, does not let go of her notebook or her telephone, in this hospital unit overwhelmed by the influx of toddlers, since the bronchiolitis epidemic has started.

We no longer hesitate to make two bedrooms in one, by deploying a simple screen in the middle of the room, the accompanying parent will squeeze in the night on an extra bed nested to the nearest centimeter in the available space. On November 14, six new hospital beds dedicated to bronchiolitis opened in the neighboring Lapeyronie hospital, in the pediatric surgery unit, to “try to stem the influx of patients”, explains Auréline Olivier. The procedure is framed by the “Epidemic Plan” which applies until April 15 at the CHU.

Tomorrow, Professor Eric Jeziorski, boss of pediatric emergencies, imagines pushing the walls even further, reducing if necessary “scheduled exploratory care” children, knowing that the least severe cases benefit from early discharge under supervision, the CHU has 11 hospital beds at home: “We have more incoming than outgoing, there are days when we no longer know where to hospitalize them”.

“We had the first case of bronchiolitis at the end of August, and since then the situation has continued to deteriorate”explains Auréline Olivier, who arrived a year ago in this overflowing twenty-bed hospital unit. “Is it because of the “immune debt” after two years of Covid, or because we let go of barrier gestures? I don’t know… We also see that parents no longer know how to blow babies’ noses, and what could remain a simple bronchitis degenerates… In any case, the epidemic of bronchiolitis began much earlier, and there is no end to it, especially since children are hospitalized longer, in beyond the usual maximum 72 hours”notes the frame.

“This winter, we are going to cut ourselves off from the world”

Dorianne Nicola, a pediatric nurse who arrived here seven years ago, has neither“never seen that” : “We transfer children to nearby hospitals and clinics, even for 24 hours”. Within days, the stock of high-speed goggles has melted away, these devices distil forced air, and sometimes oxygen, into the baby’s nostrils to open up his bronchi.

Lucie, who arrived in the emergency room ten days ago with her little Mathéo, a month and a half old, has already changed rooms three times since her arrival. On the verge of going out and joining her eldest, two years old, and her husband, last Friday, she was living with a family in a double room out of necessity. Reassured about the state of health of the baby, arrived “very tired”, “with very great difficulty in breathing”and placed for a time under a naso-gastric tube because he could no longer suckle, she salutes the investment of overwhelmed professionals, who practice their profession in difficult conditions: “We saw how saturated the emergency room was. For lack of space, I stayed two days in a short-term hospitalization room, stuck to the emergency room, where you only stay in principle for a day. Then a day in the second floor, in intensive care, where babies in greater difficulty are hospitalized. I have great confidence in the professionals who lack equipment and who feel frustrated, sometimes at the end of their tether”.

“This story of bronchiolitis”she did not really believe it: “We were careful, we don’t hang out in supermarkets… it was quite an ordeal, it’s scary. This winter, we’re going to cut ourselves off from the world”she announces, after having rubbed shoulders with families who came back for a second, sometimes a third infection.

In the next room, Cassandre, 15 months old, is also about to leave. Youssef, 17 days old, has just arrived and his little chest is rising at full speed, a sign of an infection that is still uncontrolled.

The third day under special vigilance

That day, between the second and fourth floor, you have to find eight places. The organization is ultra-sensitive, virus dependent, specifies Dorianne Nicola: “We also test for Covid, and for the flu. And we have to take into account the bronchiolitis virus, RSV, the most common, but we also have metapneumoviruses and bocaviruses…”

The teams are very vigilant, especially in “third day of infection, that’s often when things go downhill”. But “everything depends on the children”, specifies Dorianne Nicola: “There are no rules. The first thing the parents ask us when they arrive is how long they will stay in the hospital. It can be two or ten days. And the situations are reassessed forty times a day”.

The national peak is announced at the beginning of December, in the meantime, we must hold on. For Aureline Olivier, “difficult to imagine that it could be worse than today”.