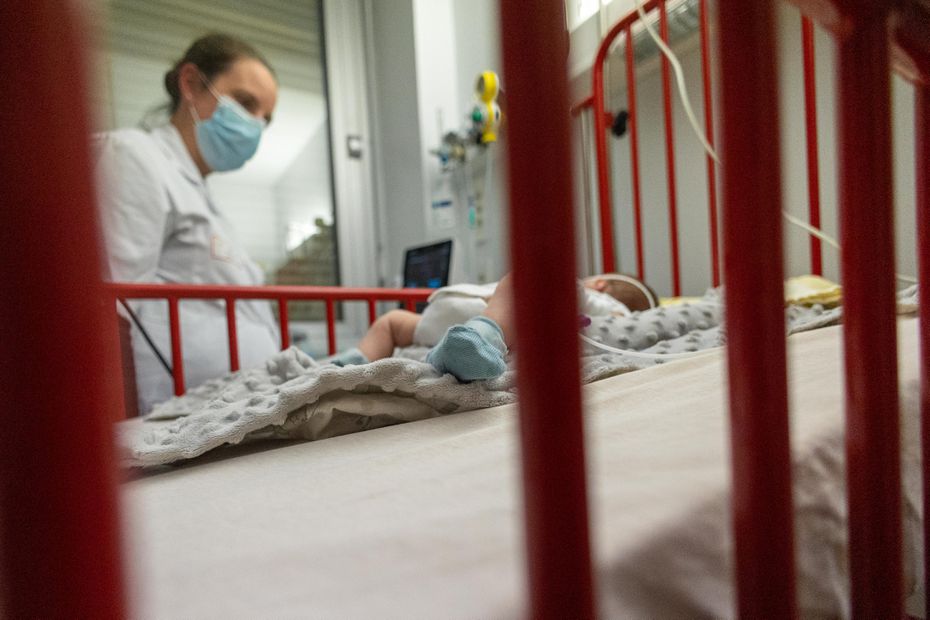 The Poitiers University Hospital is facing a large flow of babies with bronchiolitis in pediatric emergencies. The beds are all occupied and the staff is scarce while the epidemic peak is expected in mid-December.

“She is on oxygen with a stomach tube to feed her, says a dad who arrived Monday, November 21 in the evening at the pediatric emergency room of the Poitiers hospital. There are a lot of people but we were well received. Since we have been there, we have been very well followed.” A testimony that will be able to give a little balm to the heart of the mobilized caregivers of the Poitiers University Hospital and reassure the parents. For the past few days, the situation has been tense in the pediatric emergency room of the hospital. Monday night, the emergency room wait time was seven hours. This Tuesday morning, it was two o’clock. The hospital had not seen such an outbreak of bronchiolitis in 10 years.

Arriving early this year, from mid-October, it does not spare babies in the region. “In the classic period, we have around fifty visits to pediatric emergencies. For several days we have been close to 80/90 visits, explains Alain Lamy, director of the woman-mother-child center of the CHU. The reception conditions are not those that we can usually offer”he regrets.

The difficulty being that we are looking for medical and paramedical personnel capable of providing coverage for these beds.

Alain Lamy, director of the women’s, mother’s and child’s department at the University Hospital of Poitiers

Nurses from other units with knowledge of pediatrics were mobilized. Retired nurses were recalled as well as temporary nurses. This situation even though the epidemic peak has not yet been reached. It should arrive by December 15.

Bronchiolitis is a highly contagious viral epidemic respiratory disease. It is a winter virus that mainly affects children under two years of age. It is identified in infants by: a clogged, runny birth, the tou and the difficulty of feeding for a small baby under three months and respiratory distress. If the symptoms are impressive, Only 2 to 3% of children are hospitalized, according to the Ministry of Health. In the majority of cases, the disease heals on its own in 8 to 10 days. Referral to the pediatrician is sufficient.

The epidemic stage has been reached throughout France. The situation is particularly critical in Ile-de-France. The AP-HP has just triggered level 2 of its “hospital under tension” plan this Tuesday, November 22, 2022, according to information from France inter. This emergency plan should lead to many deprogramming of non-urgent operations in the coming days.