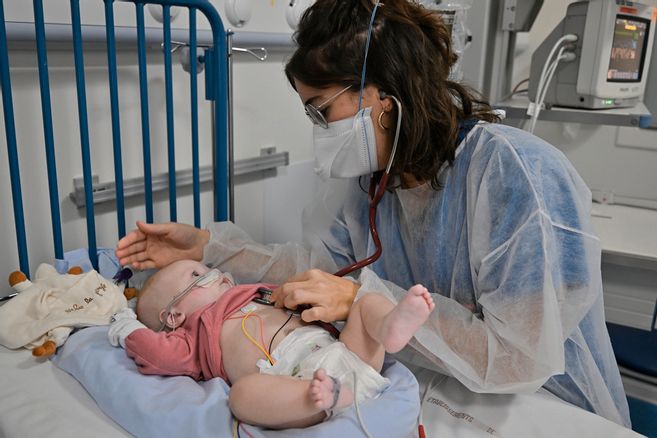 According to Public Health France, bronchiolitis, this most often benign infection that affects the small bronchi, was the cause of nearly half of hospitalizations for children under 2 years of age (49.3% precisely), from 31 October to November 6, in Auvergne-Rhône-Alpes.
Available in case of transfers
“To date, the epidemic has had no impact on hospitalizations” at the Émile-Roux hospital center (CHER), in Le Puy. Since Friday, November 4, “we have identified four bronchiolitis, including two with return home and two with hospitalization. The Puy pediatrics department is not under pressure, ”according to management.
Each week, a situation update is coordinated by the Regional Health Agency in the presence of all the support establishments of the hospital grouping in the territory of Auvergne-Rhône-Alpes. “The bronchiolitis epidemic is the subject of particular attention from the authorities and all health establishments. This point of crisis makes it possible to assess the situations encountered in all territories, summarizes Cédric Ponton deputy director. At this stage, the CHER is not concerned by the transfers, but remains available in the event of a request from the Agency. »
Given the national situation, all the hypotheses are indeed anticipated, “including intra-regional transfers. Transfers between regions have also been discussed and remain under the authority of the ARS”.

Five tips from a childcare nurse

Claire Royer de la Bastie, founder of the collective “I am a childcare nurse”, explains how to behave when her infant suffers from bronchiolitis.

Do not blame. “If your baby is sick, it’s not your fault. The majority of children, the first year of their life, will probably have this infection which is mainly characterized by an increase in the respiratory rate and the obstruction of the bronchi. Moreover, in the majority of cases, they absolutely do not need to be taken to the emergency room and heal after ten days. »

Act on the child’s environment. “It is important to practice barrier gestures for the whole family (washing hands, nose, etc.), to maintain the temperature of the house at 19°C with air that is not too dry. Indeed, in a more humid environment, the mucus will be thinned and it will be easier for the child to unclog his bronchial tubes. You can also go out into parks or forests to benefit from the humidity, but not in densely populated places. »

Perform a few simple gestures. “Regularly clean the child’s nose with saline, encourage him to cough so that he gets rid of his phlegm, carry him as much as possible so that he is in an upright position and straighten the bed with wedges to that it is slightly elevated during sleep (no cushion, or under the mattress). »

Split the feed. “Since the child is congested, he may have difficulty feeding, so you need to give him smaller amounts, more regularly. »

Go to the emergency room if… “The child no longer interacts with his surroundings, no longer eats and his diapers are no longer wet: you have to call in professionals quickly. »