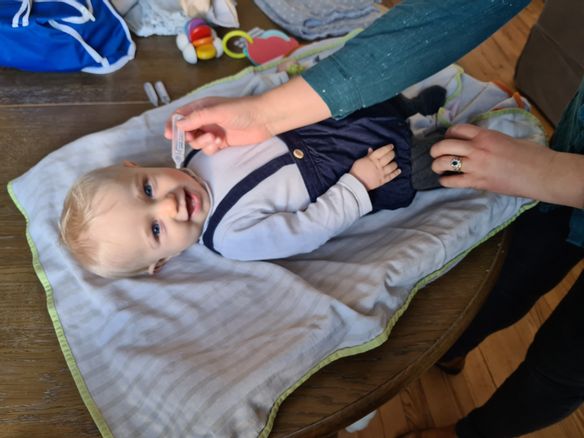 1 – Don’t feel guilty. “If your baby is sick, it’s not your fault. The majority of children, the first year of their life, especially if they were born during the summer, will probably have this infection which is mainly characterized by an increase in the respiratory rate of the child and the congestion of the bronchi. Moreover, in the majority of cases, they absolutely do not need to be taken to the emergency room and heal after ten days. »

2 – Acting on the child’s environment. “It is important to practice barrier gestures for the whole family (washing hands, nose, etc.), to maintain the temperature of the house at 19° with air that is not too dry. Indeed, in a more humid environment, the mucus will be thinned and it will be easier for the child to unclog his bronchial tubes. You can also go out into parks or forests to benefit from this humidity, but not in densely populated places. »

Cleaning the nose with saline is one of the good things to do in case of bronchiolitis.

3 – Carry out a few simple gestures. “Regularly clean the child’s nose with saline solution (and don’t hesitate to use the baby nasal aspirator), encourage him to cough so that he gets rid of his phlegm, wear him as much as possible so that he either in a vertical position and straighten the bed with wedges so that it is slightly raised during sleep (no cushion or under the mattress). »

4 – Split the feed. “Since the child is congested, he may have difficulty feeding, so you need to give him smaller amounts, more regularly. »

5 – Go to the emergency room if… “The child is apathetic, no longer interacts with those around him, no longer eats and his diapers are no longer wet: you have to call in professionals quickly. »